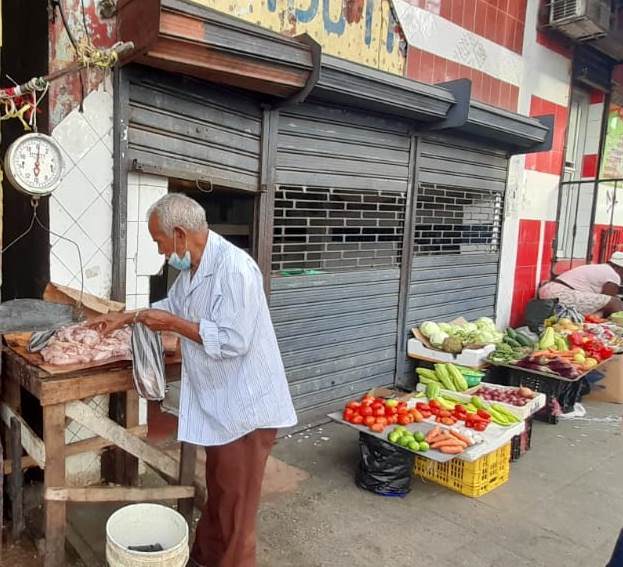 A meat seller in Cristo Rey

Santo Domingo.-The price of a pound of meat, chicken, and pork remains expensive in the market and with an upward trend, as Christmas and New Year approach, according to sellers of both products.

According to sellers, chicken sells for between 70 and 75 pesos, while pork is offered at 90 and 95 pesos, who warn that prices may rise more if the government does not import enough meat to supply the market.

“Here there is no price control, it is sold according to supply and demand, and if the Government does not import enough meat, chicken can be sold for more than 80 pesos at Christmas and New Year, and pork at 110 pesos,” Julio Alcántara a butcher in Villa Consuelo, warned.

Chicken and pork are the most consumed meats among the Dominican population due to the high cost of beef, which sells for over 120 pesos, depending on the quality.

The chicken is bought in bulk at 63 pesos per pound, to be sold at 70 and 75, according to the merchant Aridio Reinoso, owner of a stall in the Cristo Rey market.

“We buy it at 63 and we have to sell it at 70 and 75 to be able to earn something, but there are those who sell it up to 80, because here there is no control of anything,” said Reinoso.

Many food products have experienced increases in recent months, attributed to the rise in the cost of international freight.

Some merchants allege that before the COVID-19 pandemic, bringing a van to the country from China cost 2,500 dollars and that now the same freight costs up to three times that amount.

In raising chickens and pigs, raw material imported from different parts of the planet is used, including corn and medicine used to combat swine and poultry diseases.

There have been reports over recent weeks from government, producers, and vendors saying there would be sufficient quantities of chicken and pork for the holidays. Suspect they sidestepped obligations of fair prices all knowing price increases would create less demand from those having little money to spend to benefit their holiday tables. It leaves sufficient quantities for those with resources. So, what they said is true. The upward trend promotes it.

They still have salami who cares for Christmas, the gap between poppies and the Wawa tribe gets bigger