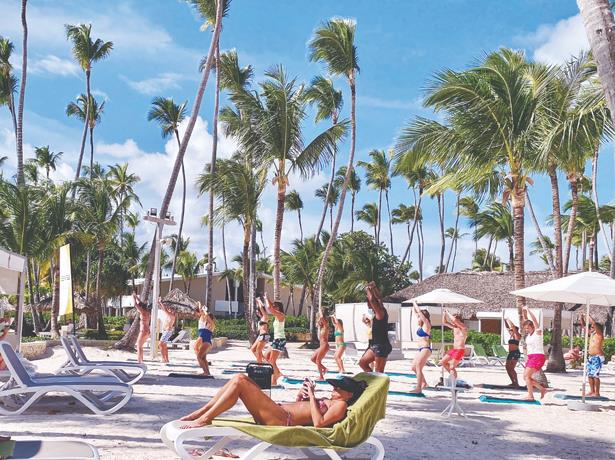 Punta Cana, Dominican Republic
Isolation zones guarded by guards: hotels in the Dominican Republic have conditioned part of their facilities for guests infected with covid-19 to protect their recovered tourist activity, the economy’s primary sector, after the pandemic’s impact in 2020.

This paradisiacal Caribbean country, the destination of millions of people and cruise ships from all over the world, was one of the few that kept its borders open before the arrival of the virus, and the government wants to keep it that way given this alarming increase with the arrival of the omicron variant.

Nearly 5 million tourists visited the Dominican Republic in 2021, double the number in 2020 and 77% of the 6.4 million reported in 2019 before the pandemic began.

According to the government, in December alone, 728,335 non-residents were counted entering the country, a historic high in the Caribbean nation’s monthly tourism rates.

However, some of these tourists have had to face the contagiousness of the coronavirus.

The country is reporting an outbreak of cases with the arrival of omicron, the new variant of the coronavirus, with a record 5,968 infections reported on Friday. A month ago, 254 were reported with high vaccination rates in this country.

In total, there are 444,985, although authorities have emphasized that lethality remains low.

In the province of La Altagracia, which includes Punta Cana, an attractive tourist spot, contagions began to be registered by the hundreds since January 2: 284 on Friday.

“My five-year-old son tested positive (for covid-19), we notified the hotel and they moved us to an area they had set up for confinement,” a Chilean tourist staying at a five-star hotel in this coastal city in the far east of the country, who asked not to be identified, told AFP.

The 40-year-old man, who is visiting the country with nine other people, explained that when they were transferred to the “confinement” area of the hotel, at first only one building was available, but as the days went by, another block was set up.

The rooms are guarded with guards, he said. “We believe they had many people in the same condition,” he stressed.

It is unclear how many guests occupy these confinement areas: the hotels prefer to avoid any information mistaken for bad publicity. However, an executive of a major chain commented under reserve that their rates for guests in the isolation area were “laughable.”

The hotel association also did not respond to requests for comment.

Dominican President Luis Abinader ruled out confinement for now. “Going back, that’s impossible,” he said at an official event Thursday. “We are taking all measures to ensure that we can have a country with safe health, but at the same time that we can continue with our economy,” he pointed out.

“We managed to recover and take care of tourism, the economy, jobs, foreign exchange and hope, reaching record numbers of tourists and more than 250,000 jobs in the tourism sector,” he later congratulated himself at a press conference.

Even so, there are criticisms about these measures. For example, the president of the Dominican Medical Association, Senén Caba, criticized the State for its “permissive” behavior with the commercial sector and estimated that the authorities are being “highly complacent,” contributing to increasing the number of contagions.

On Wednesday, the Senate approved a resolution requesting the Ministry of Health to demand PCR tests and evidence of vaccination from all people visiting the country.

“We cannot receive everyone who wants to without any kind of protocol,” said Senator Yván Lorenzo in the Upper House.

However, Joel Santos, hotel businessman, and tourism consultant indicated that precisely the protocol applied in the tourism sector had guaranteed the reported growth.

According to the local press, a cruise ship docked, for example, in Puerto Plata (north) with 146 infected people, most of them being crew members, and the authorities assured that no sick person would get off the ship.

“Tourism is confidence and that manifestation of confidence was transmitted (…) in the countries of origin of tourists who saw that the Dominican Republic took its process seriously,” said Santos.

This isolation regime was set up as one of the early sanitary protocols imposed by government on the resorts. The resorts had to comply or be denied tourism. The isolations at the resorts are rarely spoken of. The less said is better for business. There are no public numbers for infections in the resorts. It would be very interesting to see percentage figures of visitors with covid at the resorts.

Cruise ships are large meandering petri dishes for covid; closed quarters and questionable internal sanitary ventilation can only act to spread the virus among passengers and staff. Governments and port authorities should exercise extreme caution when they make port calls.