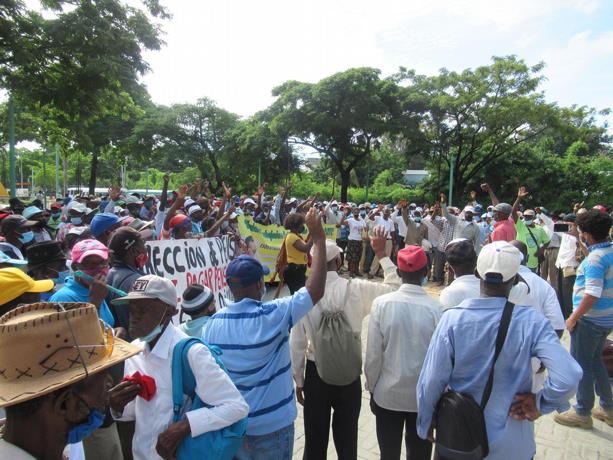 The Socialist Movement of Workers (MST) and the Union of Cane Workers (UTC) denounced that the increase in the minimum wage for workers in the sugar industry, announced by the government, will not benefit the majority of workers because they receive payments piecework by production and do not enjoy a formal employment relationship with a salary.

“Most sugarcane workers, herdsmen, carters, and other functions within sugar agricultural work do not earn a salary per day but rather piecework payments, around 200 pesos per ton of cane cut. They do not benefit from the salary increase decreed by the government,” they declared in a statement.

The representatives of these organizations demand that the payment per ton of cane cut be increased to at least RD$580, and have maintained a fight against semi-slavery, precariousness, and super-exploitation, for decent wages, freedom of association, pensions, access to health, housing dignity, and an eight-hour working day because currently in the sector the workdays run up to 14 hours.

According to the declaration of these organizations, the working class does not have representatives in the dialogues of businessmen, government, and union bureaucrats.

“The union bureaucrats of the CNUS, CASC, and CNTD also represent business interests. That is why Abinader rewarded his leaders with privilege pensions of 75 thousand pesos. The CNUS, which in the past supported the PLD governments and Gonzalo Castillo’s candidacy, now fervently supports Abinader and even invited him to be a speaker at its Congress in December last year,” they stated.

Last Tuesday, the President of the Republic, Luis Abinader, and the Minister of Labor, Luis Miguel de Camps, announced an “unprecedented” salary increase of 101.8% for agricultural workers and 97% for administrative workers in the sugar sector, retroactive to January 2022.

The sugar companies have always executed escape hatches for the methods they use to employ and pay their manual laborers, methods that consistently protect their profit margins. One such method is mentioned in the article, the piecework. It is used to avoid government intervention.

It is time to abandon this industry. With a very dark history (bad legacies from the 1600’s, 1890’s and 1916-1924), this industry only brings shame and hate to DR from enemies which include a political party in the US (Democrats) that uses the excuses (really lies) of the DR sugar industry hiring under age workers or horrible living quarters or miserable wages or racism for hiring foreigners from the country next door to pound DR and they even push for embargoes against the DR. This industry is a still a magnet that pulls illegal foreigners to DR.

DR is now importing corn syrup and it is time for DR to abandon this industry and disarm our enemies from further attacks against DR. NO MORE BATEYES or sugar cane planting and harvesting!! Walk away from it and don’t look back! It is still dragging us into human rights problems!

Cannot abandon the industry. Export of sugar brings in needed revenue. What is needed is respect of the workers thru reasonable salaries and working hours, It is time to bring in some mechanization of planting & harvesting to assist the workers and to better company profits.