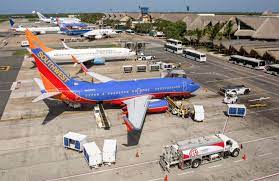 The Dominican Republic received, as a whole, 469 flights and 244,368 passengers in 2021, from Russia and Ukraine. Archive

Even though in the Dominican airport terminals there are no reports on flight cancellations from Russia and Ukraine, Tourinews.es attributes in a publication to Kenneth Pina, commercial director of Colonial Tour and Travel, that the geopolitical crisis is affecting connections airlines, despite the boom in the Russian market in the Dominican Republic.

“All flights from Ukraine and Russia with the Dominican Republic have been canceled,” Kenneth Pina, commercial director of Colonial Tour and Travel, points out.

“In general, the Russian tourism market recovers quickly,” Pina points out in an exclusive interview for Tourinews; Colonial Tour and Travel is a DMC company with extensive experience as a receptive tour operator in the Dominican Republic. However, official sources told this medium that neither Samaná nor Puerto Plata has formal notification of cancellation by Nordwing, an airline that operates both destinations every ten days, and that they are attentive.

Another
Infotur Dominicana report reports that in 2021 the Dominican Republic received 262 flights from Russia, 241 under the standard modality, and 121 under the charter modality, transporting 178,955 passengers from this Eurasian nation.

From Ukraine, 207 flights arrived in the Caribbean nation, of which 122 were under the regular modality and 105 under the charter modality, transporting 65,413 passengers last year.

Together, the Dominican Republic received 469 flights and 244,368 passengers from these two nations.

What side you are President Abinader, do you guarantee safety for Russian tourists in the Dominican republic.?? if international saccions are on the way, its gone be tuff. Tourism will suffer

There will be less Russians coming to the RD, if any at all. Poland, Czech Republic, and UK have closed their airspaces to Russian aircraft. It can be expected there will be other countries doing same.

Well we all know who is getting shafted!

Somehow…as is normal in the DR…the numbers do not add up. “Infotur Dominicana report reports that in 2021 the Dominican Republic received 262 flights from Russia, 241 under the standard modality, and 121 under the charter modality, transporting 178,955 passengers from this Eurasian nation.”

DR be neutral to the military actions! Do not opine! You must diversify your customers. Do not upset either country. You hear me: Do not opine!

Russia has caused a war in Ukraine, President Putin is threatening to use nuclear weapons, how can you be neutral to such acts.

Our exaggerated and lopsided reaction is affecting us more than the physical presence of Russia in Ukraine. We all know that Russia and China got nukes and they will attack land next to them that they consider important. So get used to it just like you did with Afghanistan, Iraq, Syria, Lebanon, West Bank, and the Arab springs. China has plans for Taiwan and you will get used to it!

If you want to accept RUSSIAN FLIGHTS… then sleep with the enemy!!!!!!!!!!