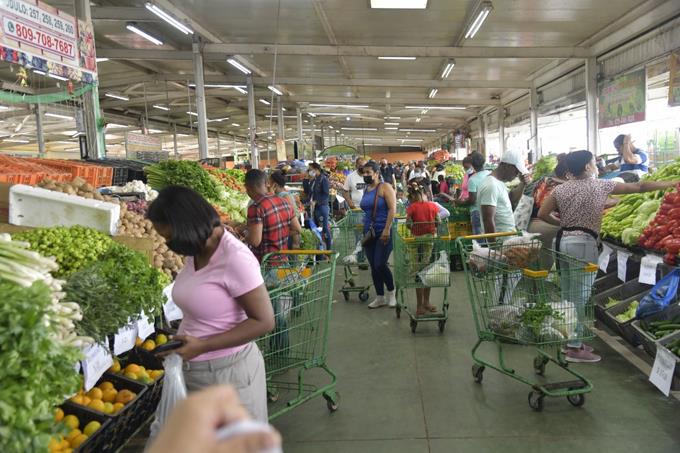 Santo Domingo, DR
The increase in food prices has been a much talked about topic in recent months. And this situation is not only a problem for buyers but also for the owners and those in charge of selling.

Everything involves a process; the managers buy at a specific price and, in their businesses, increase it a little more to make a profit. But the rise in prices has affected both their economy and the arrival of customers.

In a tour made by journalists of Listín Diario through different markets located in Los Mina, La Duarte, and Villa Consuelo, it was possible to speak with the sellers about the food prices, specifically vegetables, fruits, and meats.

La Duarte Market is an establishment with multiple businesses also in its surroundings. The owner of one of them, Francisco Ortega, indicated that everything has gone up and that foods such as corn, milk, beans, and wheat are among those that have increased the most, but not cod and herring, products that have increased more than 100%.

Also, on the outskirts, a young fruit stand owner said that pineapples used to be bought at 35 pesos, and now they are purchased at 60, to be sold at 75 and 100.

Meanwhile, the quintals of milkweed were being paid at 600 pesos and now at 1,000; for this reason, those offered at 35 pesos must be sold at 50 pesos.

Inside the market, where a group of different mini-businesses is installed, you can find spices, fruits, vegetables, all kinds of meats, among others.

Alexander Decena, who is in charge of selling sausages in his work area, said that the cutlet increased three pesos, the ribs about four pesos, the sausages five pesos, and the salamis from 2 to 5 pesos per pound. He also stated that these prices would continue to rise.

In the Villa Consuelo market, what Mrs. Argentina “Fior” Cruz sells most are pigeon peas, and she considered that the price of these has increased “quite a lot.” Fior reported that she used to sell them at 100 or 110 pesos in the past, but that the situation has forced her to sell them at 130 and 140 pesos.

Opposite Fior was Luis Durán, a grocer, who said that the prices of some products have increased by about 75% and that sales have decreased.

Also, out front, Amado Silvestre, who sells only chicken, said that prices have increased by about 10 pesos in two weeks. Amado said that he used to sell a pound of this white meat at 73 pesos, and now he has to sell it at 83 pesos.

In Villa Consuelo, Mrs. Brunilda Martínez said that meats had increased a lot, which caused customer complaints. In the store, retail beef, which is equivalent to one or two pounds, costs 190 pesos, while wholesale, which consists of customers who are supplied in large quantities, costs 152 pesos.

Likewise, wholesale pork legs cost 90 pesos, and retail pork legs cost 110 pesos. Sausages, according to Brunilda, remain at the same price, hovering around and varying within the 180 pesos range.

In Mrs. Minelis Castillo’s business, most groceries, vegetables, and greens have increased by about ten pesos. The pound of food such as potatoes, pumpkins, peppers, onions, broccoli, avocados, among others, ranged from 20 pesos to 50 pesos, and all have increased, except for cassava, which remains at 15 pesos.

The lady has been working with her husband for more than 20 years and considered that sales have dropped a lot because “everything is expensive and difficult.”

The same businessmen have acknowledged that customers are displeased with the high prices. Some of these businesses have shown losses because buyers consider that foods such as chicken or some vegetables are costly.

In larger establishments, prices tend to be more expensive and vary depending on the business. In the middle of the same tour, it was possible to observe the variety of prices they offer in different supermarkets.

A worker in one of the supermarkets reported that meat prices have increased by about 10% in recent months.

The accumulated action of returning to normal from COVID (demand outpacing supply), the pump of free money by the treasuries around the world, and now the war, will force the natives to commit more crimes, migrate to other countries, and trade between eating or receiving medical treatment with their limited budget.
We have been on this road before (inflation triggered by external forces) so the question is what are we going to do now differently to mitigate the next one? Show some leadership and imagination and perhaps push for self sufficiency and reduce imports or dependence with others?