Lack of chicken and eggs drives Haitians to despair 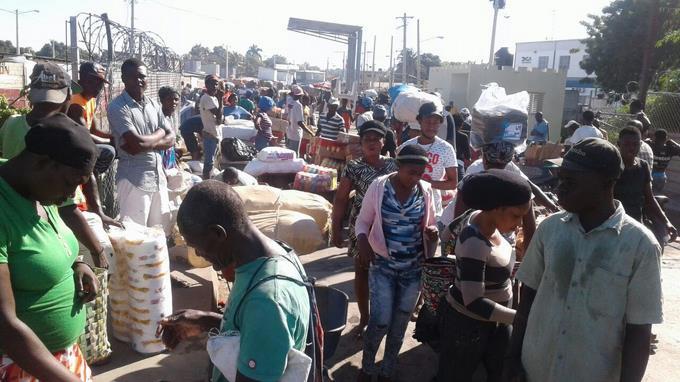 Haitians who participated yesterday in the binational market expressed their concern over the shortage of chickens and eggs in their country.

They say that when agricultural products appear in public stores and markets in their country, they command prices unattainable for the poor.

The merchant Dianny Pierre said that the Customs authorities in Ounaminthe (Haiti) charged them very high taxes and added that when they find live chickens in Dominican territory, they buy them at an acceptable price. Still, with the tariffs charged by the Haitian customs collectors, the pound is sold in their country for an equivalent of 200 pesos, and that is why most Haitian traders and buyers prefer to buy these farm-raised birds alive.

Bankruptcy
Some Haitian traders claim that a shortage of chickens drives them out of business and that people frequently order the product.

While in the Dominican Republic, the tripe (intestines), the feathers, and the beak are wasted, Haiti uses the former to sell fried and make stews.

The feathers for decorations and the beak to complete handicrafts are sold in tourist centers. The legs, the gizzards, and offal (livers) are sold apart from the meat.

The shells of the eggs are used to decorate certain plants in the gardens of houses owned by the lower and upper-middle class.

Meanwhile, the small Haitian merchant Natanny Merá Louis comments that the Dominicans throw away the chicken tripe as waste, but that in Haiti, some fritters and cafeterias sell them fried, stewed, and in soups, but that now there is a crisis in the commercialization of live chickens.

Everybody is feeling the global inflation, devaluation of money, and the higher cost of borrowing money. Not a good excuse to migrate and put the stress on the host! No a good excuse to critique Dominican for the way they handled foods or meats.