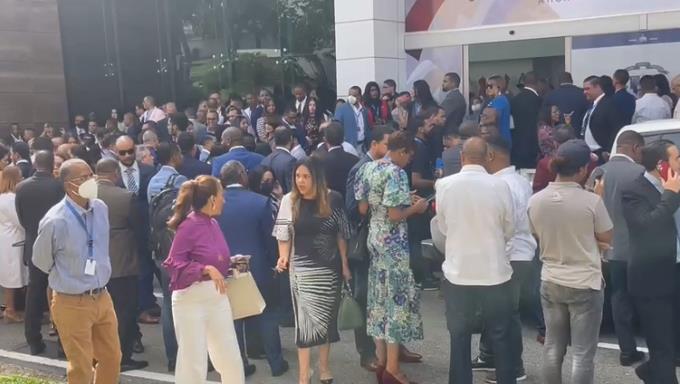 Santo Domingo.- At approximately 9:15 a.m. this Friday, dozens of participants and guests at the inauguration of the XIX Latin American Summit, which will take place with the presence of President Luis Abinader, were removed from the convention hall under the justification that they had to be reviewed by the president’s security.

The ballroom entrance and lobby were packed with guests complaining of disorganization leading up to the event.

Congresswoman Juliana O’Neal left the room and discreetly expressed as she walked that she was leaving because “it’s hot and there’s nowhere to sit.”

The presidential security arrived after 9:00 in the morning and notified those present to leave the room to later be reviewed by them one by one.

It is the first time that the summit has been held in the country and it will be headed by the head of state and will be attended by the OAS Secretary General, Luis Almagro.

The room where the act is planned to take place is obviously full of people and some have had to stand and have improvised placing chairs in the back to accommodate some of the guests.

The event takes place in room B of the Convention Center of the Dominican Foreign Ministry.

Suspect the assassination of Shinzo Abe the former prime minister of Japan gave concern to launch a security review.