Environment: «Situation of sargassum is critical in the Dominican Republic and the Caribbean» 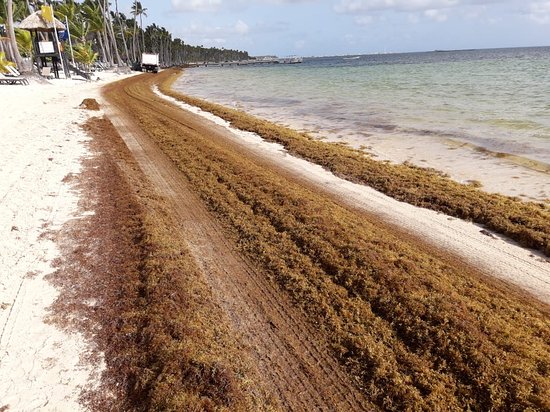 The sargassum situation in the Dominican Republic and the Caribbean region is “critical,” according to José Reyes López, Vice Minister of Coastal and Marine Resources of the Ministry of Environment and Natural Resources.

He attributes the increase of brown macroalgae, which are becoming more frequent, to the effects of climate change due to human activities. In addition, the arrival of sargassum affects Dominican beach tourism, the main economic engine of the Caribbean country.

“More and more, as a product of climate change and the changes that are generating the currents, the sargassum is reaching points where it had never reached our island before,” he said, giving as an example that the algae have reached Pedernales, Miches and Puerto Plata.

He explained that the presence of sargassum in the Caribbean was given special attention in 2011 when it accumulated on the coasts. In the last few years, it has been monitored even by satellite, as the University of South Florida, according to Diario Libre.

“In its June report this year, the academy indicated that the amount of sargassum continued to increase in the tropical Atlantic, the Caribbean Sea, the west-central Atlantic, the east-central Atlantic and the Gulf of Mexico. In total, with the regions combined, the amount increased from 18.8 million tons last May to 24.2 million tons in June 2022, setting a new all-time record,” it added.

During the celebration of the Latin America and Caribbean Climate Week 2022, he also warned that more sargassum might enter the Caribbean Sea and the Gulf of Mexico in the following months due to the main ocean currents.

Reyes López said that since it is becoming a problem in the region, a working group will be launched with different institutions and the support of the European Union. The table would be chaired by the Dominican Republic, which seeks to position itself as a regional leader on the issue.

He warned that rapid action must be taken in relation to the sargassum that is destroying marine biodiversity in the places where it arrives, turtle nesting, fishing communities, obstructing coral reefs and the environmental ecosystem, harming fishing communities, and increasingly impacting the tourism sector.

The Vice-Minister indicated that the sargassum barriers are placed individually in the hotel zones but be assured that it is done with the guidelines of the Vice-Minister of Coastal and Marine Resources of the Ministry.

He acknowledged the work of the barriers but warned that they were not enough and that they only stopped a part of the algae. He said that, in addition, the issue of collection and final disposal of sargassum must be addressed. “That cannot be taken to just any landfill,” he specified.

Andrés Bisonó León, executive president of Sargassum Ocean Sequestration of Carbon or SOS Carbon, considered that the sargassum issue has worsened due to the lack of actions to face the problem.

He explained that SOS Carbon, a research project of the Massachusetts Institute of Technology (MIT), developed a cost-efficient mechanism for collecting sargassum in the sea before it reaches the beaches. He assured that this model minimizes sargassum’s economic, ecological, human health, and environmental impacts.

“We continue with the goal of uniting all the actors to work as a team and provide the necessary response to the urgency of the problem,” said Bisonó León.

Senor Leon is correct. Other countries have taken taking action. Sargazo is used for fertilizer , cattle feed and even to make house bricks . It has created a whole new industry. You do not bring it to landfill. Accion ambiental Guayacanes AAG sent a letter last year with recommendations to the Minister of Environment and the Minister of Tourism but never received a response. . In Guayacanes when the sargassum reaches the shoreline, it is clean , light and easy to handle. Take it that day to a field and let it decompose. It can be used as fertilizer by local residents for vegetable gardens. See Facebook Page : Accion ambiental Guayacanes.