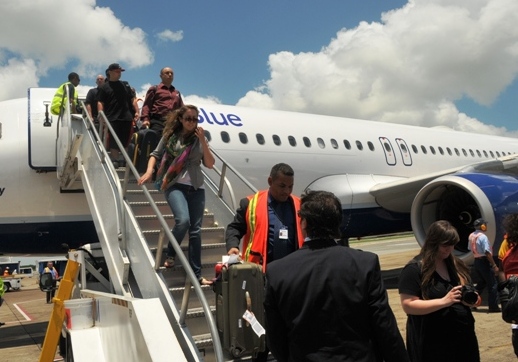 Santo Domingo.- Santo Domingo. The president of the Chamber of Deputies, Alfredo Pacheco, asked the Government to cancel the license of the airline JetBlue, due to “the abuse” to which hundreds of Dominicans are subjected when traveling with that company.

He assured that he was the victim of the abuses committed by that airline and that he realized that it is a serious problem that has affected many Dominicans.

He said that, although he had been listening to complaints about the mistreatment that company had been committing for some time, he realized the magnitude of the problem when he was affected on his own.

Good reporting would site examples! What are the allegations?

He was upset due to delays, people herded like goats, non Spanish speaking staff, and etcetera on flights to/from Puerto Rico. All of these things have been experienced by many air travelers throughout the world during these times. He is no exception.

ridiculous everyone is stressed to the max get some tougher skin

Think the honorable deputy distressed by JetBlue’s sting wants to lash out in a manner stronger than the injury he received. Taking away the airline’s license to operate in the RD because of abuse committed against him and the “hundreds” of Dominicans is heavy handed. JetBlue is qualified to due process. All airlines are under stress because of delayed flights, canceled flights, and crew shortages that put all parties on edge. The deputy needs to take this factor into consideration and seek a less drastic measure, a compromise, that will insure the traveling public is treated fairly by JetBlue. Its steady flights to/from the RD are needed to be preserved at competitive costs. Eliminating a carrier places stress on other carriers and increases airfares.

Honestly, English speaking tourists have the same complaints – only the language issue is reversed. If I complained every time a gate change at SDQis announced only in Spanish I would be always complaining. This is just stupid

I agree. I just had a 3 hour delay 2 Saturdays ago and had to tell the counter person to make announcements in English also. They change the gate twice.

In one video… they said they had options… “Spirit has as many flights as Jetblue, maybe we will support Spirit instead”… Plot Twist… JetBlue agreed to buy Spirit the very next day.

Haha you aren’t that important…hahaha take away their license. Get over yourself. Real world

Get over yourself, Mr.Pacheco. Lots of American tourists are on those delayed flights as well. Do you see the US Transportation secretary claiming discrimination against Americans? Is there something else going on here? Is someone’s palm not being greased?

It is good that politicians speak up about these big companies . We are not flying for free . We pay top dollar for JetBlue flights.

It is good the politicos do speak up. The airlines will sit up, pay attention, and maybe find relief for bad issues. Squeeky wheels get the oil.

About paying “top dollar”, I suspect you would probably pay more for American, United, or Delta flights. JetBlue is a large US low cost airline.

JetBlue is not low cost anymore

Typical ….. reaction from a Dominican politician who can’t tell left from right…

Well my wife and I was schedule to depart on thusday july 28 at 4 pm and my flight got delay several times and right about 11:45 pm the jetblue personel ananuced that the flight was cancelled. There was a big chaos but I was able tocreschedule my flight for satueday evening. But tha is evey inconvenient for me,my wife and my for childrens

They always do this just before they announce a brand new “National Airline”… they did it last year with SkyCana… who had their license revoked the first day and are now chartering flights out of Miami…. (btw, SkyCana was using Jetblue planes). They promised $495 fares with extra bags and a hot typical dominican tres golpes breakfast… (never happened and cant… its just not sustainable)