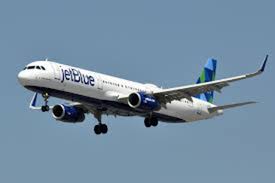 Santo Domingo, DR.
The National Institute for the Protection of Consumer Rights (Pro Consumidor) warned through a publication on its social networks that it will no longer issue warnings to the airline JetBlue and will respond to all consumers according to the magnitude of the non-compliance.

The entity, which must protect the rights of consumers, expressed that the airline’s non-compliances have been reiterative, as well as the complaints and claims of consumers, and called on the latter to approach the entity.

“Pro Consumidor will not issue any more warnings to JetBlue Airlines,” said the entity in one of two publications. Pro Consumidor’s reaction is motivated by the constant complaints from Dominicans regarding the airline’s mistreatment.

Earlier this week, the president of the Chamber of Deputies, Alfredo Pacheco, criticized JetBlue for its behavior and “abuses” against Dominicans who travel with this company.

Pacheco recounted his inconvenience with the airline during a commercial flight to Puerto Rico last Saturday and how he observed that they only committed outrages against Dominicans, for which he asked the Dominican Government to cancel their license.

“They are abusers, the way they treat Dominicans, it’s a little creepy,” Pacheco began his story, he went on to say that he had to attend an activity in Puerto Rico, and they sent him the ticket with a flight for 2:00 in the afternoon and only at 5:30 in the afternoon did the plane take off.

Jet Blue is one of the most racist and incompetent airlines in the world today. They randomly cancel flights without any warning or explanation. The government needs to crack down on these low life’s and start penalizing them in a big way when they commit offenses against their passengers.

There is a need of a response from JetBlue.

It appears everyone and their aunties are ready to condemn JetBlue for poor behaviors, behaviors that are widespread in the strained aviation industry worldwide a this time. It is not just JetBlue alone.

Just musing, is it convenient this condemnation comes about a month after the Dominican RED Air airplane caught fire at Miami, a tragedy that possibly is the doom of the airline? Is it convenient politics, the politician and Pro Consumidor may have an agenda to help recover RED Air through their bashing of JetBlue?

Good observation! I was thinking about that. I mean all airlines right now are facing delays and cancellations, not only to the Dominican Republic.

Making an opening for Arajet?