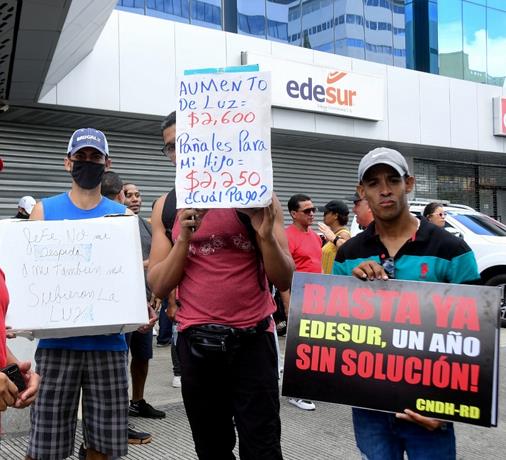 Even though both institutions oriented to the provision of electric services state that they are “willing” to receive the inconveniences regarding the increase or lack of energy in their different payment and administrative stations, people explain that they must make a partial payment of their bill to be heard.

“I had to pay a large part of the month’s rate so that they could receive a report, and the truth is that one does it so that they can give me the proof; in the end, they do whatever they want,” said Jaime Lorenzo, who made his payment at an Edesur office.

The head of information of this media, Tomás Aquino Méndez, called this Monday about six times, and in each call, he waited five minutes; in none of the questions, he got an answer, which registered more than a dozen citizens who called the newspaper to denounce the situation and say that they have ceased from using this platform to make complaints and claims.

Edesur set up tents
Edesur rectified that the work days continue at the company’s facilities, during working hours, from 8:00 am to 5:00 pm, for the 46 offices the company has throughout its concession area: our call center operates 24 hours a day, seven days a week.

According to the information provided by Edesur, the tents set up on Sunday were because the commercial offices were closed on that day, and they set up this open space to receive customers who were scheduled to protest, making them feel listened to, as intermediaries, to manage the solution of the cases in question.

Edeeste, no electricity, and no complaints
In the offices of the Empresa Distribuidora de Electricidad de la Región Este (Edeeste), there was an atmosphere described as “little collaboration,” as the users maintain constant complaints regarding the services.

“That rate is very high, I have been standing in line since 11 am to catch up with the blackouts, because that is the only thing they are giving is blackouts for two,” said Isabel Cruz Piña, a resident of Villa Mella.

At the Venezuela Avenue branch office, many residents were upset because they explained that at the time of making their claims, they were asked to pay, but also that the company employees who received them only spent their time using electronic devices.

“You talk to them, and they are looking at their cell phones. For example, I have a restaurant, and I went from paying 76,000 thousand and some pesos in three months. I am already paying 102,000 thousand pesos, so I took it to claim there and they tell me that I must pay almost the entire bill, because it is with 80% that a report of the claim is given, I came to pay and here I am paying back, from three months to now it has become a disaster,” said Margaret Alcántara.

Clarification
Recently, Edesur clarified that the open door days continue in all the company’s facilities from 8:00 am to 5.00 PM, from Monday to Saturday in its 46 offices.

Damages
One of the most predominant complaints from users is that due to the constant blackouts, they have suffered economic losses due to damage to their household appliances.

Bills
Users are complaining about increases up to three and four times in this year’s bills.

Welcome to inflation people! What shocks me is that in the last 10 years, the DR has been supposedly leading the way in renewable energy projects. Very few Caribbean countries have LNG terminals but the DR has one run by AES. What is going on my guess is that rate payers are paying for power consumption losses due to line losses and theft.