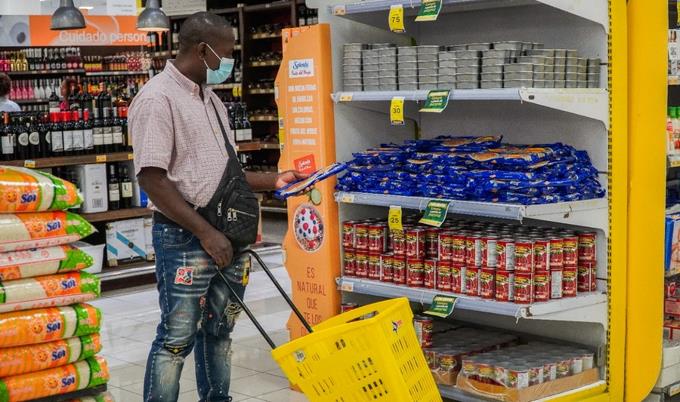 Santo Domingo, DR.
The director of ProConsumidor, Eddy Alcántara, revealed that 12 to 14 leaders of confederations and federations of merchants had been summoned for Monday or Tuesday of next week to work on the first stage of the project that led to the signing of the agreement on fair prices, with the Government.

The official indicated that the first thing to be dealt with in this first meeting is to find a way to eliminate the participation of intermediaries (links) in the distribution chain of the basic food basket items.

In this first stage, we will also try to keep prices stabilized. The mechanisms to be implemented will be discussed, and a survey was made to eliminate the links in 26 basic products that are marketed in the urban zone and 17 in the rural zone, which, if the brands are taken into account, becomes 110.

ProConsumidor, he said, sent the call on Tuesday of this week to the commercial leaders “so that we can meet with these surveys that they have on Monday or Tuesday.

Later, once the project is finished, another meeting will be called with the Ministers of Agriculture and Industry and Commerce and Mipymes (ICM); the General Directorate of Customs, Inespre, and the director of the Agricultural Bank to analyze the immediate measures and execute them.

He recalled that an agreement was made which contemplates a follow-up every 15 days, although, from the very moment of the signature, the merchants have been following up so that the prices of the products are not as high as those which have been denounced.

He stressed that next week ProConsumidor, as a signatory of the pact, will receive from the hands of the merchants the survey and the proposal that they have made to stop the links in the distribution chain.

Alcántara said that the success would be to be able to keep the prices stabilized so that the increase can be controlled to create mechanisms that can contribute to the decrease of prices of articles of the basic food basket.

The director of ProConsumidor indicated that before the signing of the pact, the price of chicken was analyzed, and already in the markets, it is worth between RD$62 and RD$63 per pound; in Inespre, it is available at RD$40, and in supermarkets between RD$59 and RD$62.

He also said that work was done in the Observatory of Central American and Caribbean prices and, in the case of chicken, the conversion of the dollar with the cost of the product was made.

Survey
Alcántara, director of ProConsumidor, affirmed that a survey was done on 26 products of the basic basket in the urban zone and 17 in the rural zone. They have already finished with 22 of those 26 central articles that reach 110 for the brands. These include meats, milk, eggs, pasta, rice, beans, bread, plantains, and cassava.

In addition, he reiterated that they have been creating mechanisms so that the products reach the final consumer at lower prices.

The agreement
On the 10th of this month, the Government signed with several associations of retailers and traders the “Pact for Fair Prices,” which seeks to eliminate links in the distribution chain and reduce the costs of different products in the basic basket of goods.

Follow up
Once the pact was signed with the merchants, it was established to follow up within 15 days. President Luis Abinader headed the signing ceremony.

What is going on around the world right now is a way of governments recouping their expenditures during the Corona Virus “Pandemic.” You realize that there has been no further investigation as to where these biological weapons of mass destruction originated from. China, is no longer being requested to explain what happened here. Governments laid out huge sums to purchase vaccines and supplement the cost of living for their citizens. If they didn’t carry out this form of ‘subsidizing’, what kind of global revolution would have occurred here on this planet? Now, that the scare is supposedly behind us, they want the money back! Not from China, of course, but from you and me! All of a sudden, we are led to believe that we have a common enemy…Inflation! OF course, tax rates being percentages of ingress and egress from goods and services. We are the sheep once again. From sheep to guinea pigs and back to sheep once again.

You couldn’t find a picture with a Dominican costumer? 🙂

Those listed and accepted as ‘great’ Dominicans and heros of the Republic included:
Rosario Sanchez
Joaquin Puello
Luperon
They didn’t look much different than the man in the picture. All black! And still ‘great.’

The correct term is to eliminate the middle man, not link.