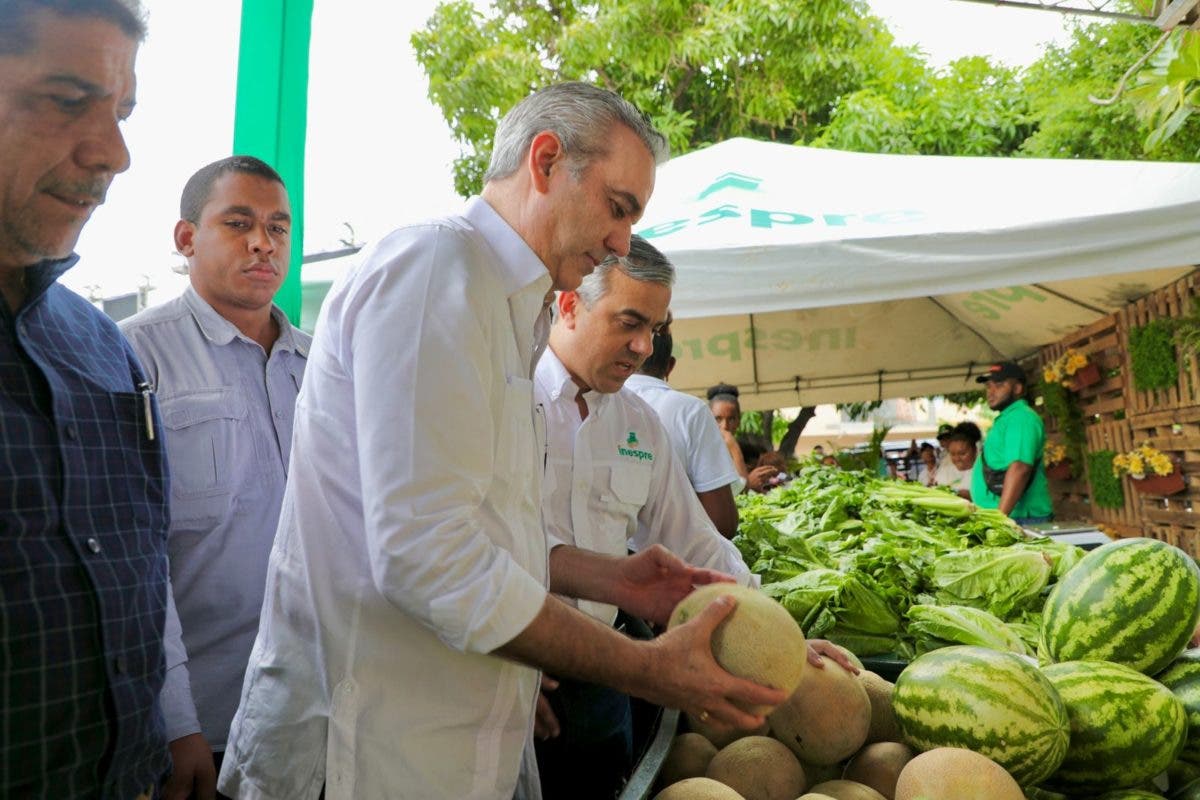 President Luis Abinader announced that the government would continue to adopt measures to lower the cost of the basic family food basket in the Dominican Republic and increasingly facilitate access to food for the population.

The President spoke after supervising Inespre’s popular sales at a producers’ market in San Cristóbal, in the company of the Administrative Minister of the Presidency, José Ignacio Paliza; the governor, Pura Castillo; the Minister of Agriculture, Limber Cruz; the director of Inespre, Iván Hernández Guzmán; the deputy director, Lino Fulgencio; the regional manager of Inespre, Diego Soto and other local and government officials. The event was attended by hundreds of residents from 25 sectors of San Cristobal.

Luis Abinader announced that in addition to working to increase the number of producers’ markets, mobile warehouses, sales of combos in supermarkets, Inespre’s regional fairs, and the application of the zero rates for the importation of 67 products of the basic family market basket.

He announced while supervising the sales of an Inespre producers’ market in San Cristobal.
He will also increase support to the countryside with more zero-rate loans for farmers, support with financing to small and medium enterprises, delivery of cards to low-income people; as well as the realization of alliances with large and small traders to reduce the cost of the products of the family basket and keep them stable over time, in compliance with the Fair Price Pact.

“Taking into account the international environment and the economic consequences generated after Covid 19, I call on all national productive sectors, traders and the population in general, to work together in the economic recovery of the country and work so that it continues to be reflected in the population,” said the President.

During his visit, the head of state highlighted the quality, variety, and prices of the products offered by Inespre and greeted several homemakers who were shopping there.

He announced while supervising the sales of an Inespre producers’ market in San Cristóbal.
While the director of Inespre, Iván Hernández Guzmán, thanked the visit of the Head of State and informed us that Inespre carries out every week 150 mobile warehouses daily, 85 producers’ markets Wednesdays and Saturdays, and sales of food combos of 500 and 1000 pesos on Thursdays in Supermarkets, and that it always has as a priority to support national production and especially the Mipymes.

“In this market, there is food from local producers and other parts of the country, such as Villa Poppy in Constanza, with quality and low prices. In San Cristobal, we are every Saturday in the parking lot of the premises of the Comedores Economicos, so I call on the population to visit us and get to know the points of sale on our social networks @inesprerd and on our institutional page www.inespre.gob.do.

During the weekend, Inespre also took more than 15 mobile warehouses to various vulnerable sectors of San Cristobal, such as Jeringa, Barrio 5 de Abril, Canastica, and San Cristobal Centro, among others.

ummmm…and they should since they charge 300 for a small beer, 500 for rice and bean and one banana at the hotels….. so wonderful for the Government for this PR move……..sad that 90% of ppl here do not even read this website articles….is a joke…..