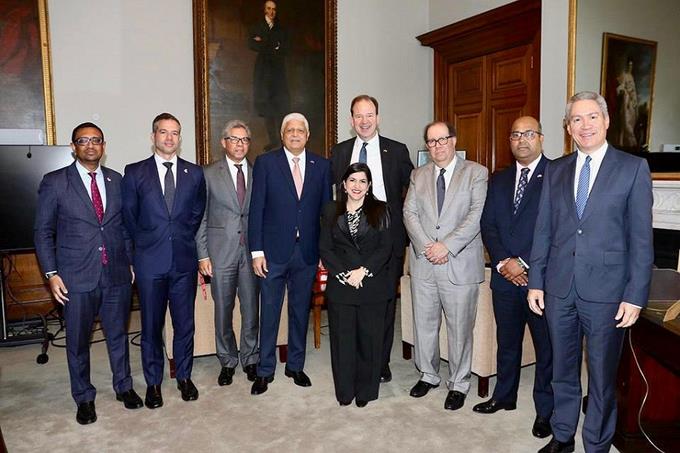 London, United Kingdom
The Minister of State for Foreign Affairs for the Americas of the United Kingdom, Hon Jesse Norman, informed that the UK increased to 3 billion pounds sterling the availability of funds through the United Kingdom Export Finance (UKEF) so that the Dominican Republic can access financial facilities that will allow it to invest in development and infrastructure projects.

Within the framework of the IX Dominican Week in the United Kingdom, the British official received a Dominican delegation headed by the Dominican ambassador to Great Britain, Elnio Durán, and the president of the British Chamber of Commerce, Amauris Vásquez, where it was explained how these funds could reach 4.5 billion pounds and that they are already available for the Government to apply for them and invest them in priority areas such as aqueducts and drinking water, energy, health, land logistics, and security.

In the meeting, which was also attended by the director of Prodominicana, Biviana Riveiro, as well as the businessmen Felipe Vicini, Pablo Portes, Leonel Melo, and Manuel Jiménez, the initiatives to be implemented to increase exports from the Dominican Republic to the United Kingdom were agreed, especially in the agricultural sector, especially avocado and bananas, as well as specialized technical services such as free zones of technology and medical services.

On the British side, in addition to the Minister of State, the UK Ambassador to the Dominican Republic, His Excellency Mockbul Ali, participated. Both delegations agreed to continue working together to expand bilateral collaboration in education, migration, tax efficiency, and technology exchange so that the Dominican Republic can accelerate the transition to an orange economy focused on creativity and new technologies.

This meeting was the most important meeting between the British and Dominican governments together with entrepreneurs, which took place within the framework of the Dominican Week in the United Kingdom, which had not been held since 2019 as a result of the pandemic, and which allows resuming the most relevant issues of the commercial and collaboration agenda of both countries.

The ninth edition of Dominican Week in the UK is possible thanks to the collaboration of critical Dominican institutions such as the Ministry of Industry, Commerce and MSMEs, ProDominicana, the Directorate General of Cinema, the Directorate General of Customs, and the sponsorship of INICIA, Banco Popular Dominicano, Banco del Reservas, Grupo Punta Cana, Pernod Ricard Dominicana, Labya, Brugal, Kah Kow, Hispania, TIMM, United Petroleum, Gulf Oil Dominicana, Design District Punta Cana, among others.