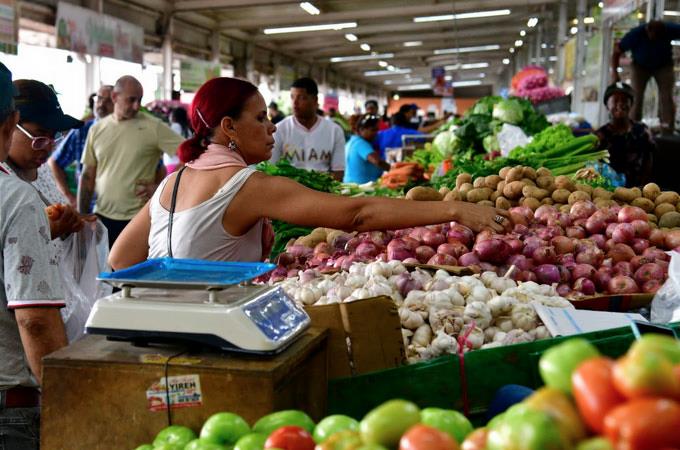 Santo Domingo, DR
The Central Bank reported that the variation of the consumer price index (CPI) was 0.96 % in December 2022, concerning November of the same year, placing the accumulated inter-annual inflation at the close of last year at 7.83 %, a behavior that represents a reduction of 181 basis points concerning the peak of 9.64 % registered in April 2022.

The institution said in a statement that the increase in the prices of agricultural products in the last month of 2022 reflects the impact of adverse weather conditions evidenced during the September-December period, highlighting several tornadoes in the Cibao region and the northwest line and the damage caused by the passage of Hurricane Fiona, as well as the lower temperatures recorded in the country which directly affected the yields of banana plantations. Additionally, the impact of seasonal factors of that time of the year related to the high relative demand for certain goods typical of the season that affect consumer sales prices is also perceived.

The report points out that core inflation turns out to be the most relevant for analysis purposes in terms of the Central Bank’s decision-making, whose main objective is to ensure price stability since it allows extracting more precise signals for the conduction of monetary policy because it excludes items with high price volatility, as is the case of some food, fuels, services with regulated prices such as electricity, Transportation, alcoholic beverages, and tobacco.

In this sense, the interannual core inflation has maintained a downward trend since May, going from a maximum of 7.29% in May to 6.56% at the end of December 2022, which is also lower than the end of 2021, which was 6.87%. The report indicates that this behavior is consistent with the monetary stance implemented by the Central Bank of the Dominican Republic, which has contributed to mitigating domestic demand pressures.

Also, the Central Bank’s note adds that, as the monetary policy transmission mechanism continues to operate, the models of the forecasting system of this institution show that inflation will converge to the target range of 4% ± 1% before the end of the second quarter of 2023.

According to the report, inflation in 2022 was not higher, mainly due to the institution’s successful combination of monetary policy measures, government subsidies to fuel and electricity tariffs, and support for agricultural production. In addition, the second half of 2022 reflects a slowdown in commodity prices, particularly oil and food, and global container shipping costs.

The BCRD explains in its report that the indexes that experienced the highest relative variations at the end of December 2022, concerning the same month of 2021, were Food and Non-Alcoholic Beverages (11.19%), Miscellaneous Goods and Services (10.49%), Restaurants and Hotels (9.47%) and Housing (9.07%), which contributed 73.74% of inflation in the referred period. To a lesser extent, the annual increases in the price indexes corresponding to the Education (8.69 %), Furniture and Household Goods (6.85 %), and Transportation (5.88 %) groups had a lesser impact.

Regarding the results by the group for December 2022 concerning November of the same year, the issuing entity explains that the group with the highest incidence was Food and Non-Alcoholic Beverages (2.09 %), representing approximately half of the general inflation of the month. This behavior is mainly due to the increase in the prices of green and ripe bananas, fresh chicken, and potatoes, which contributed slightly more than a third (36.7%) of the CPI variation in December. Other groups whose increases influenced the month’s inflation were Transportation (0.73 %), Miscellaneous Goods and Services (1.03 %), Restaurants and Hotels (0.75 %), Alcoholic Beverages and Tobacco (1.22 %) as well as Recreation and Culture (0.92 %).

The price index of the Miscellaneous Goods and Services group varied by 1.03 % in December 2022, fundamentally due to the price increases registered by services and personal care items in the referred month of December, which experienced variations of 1.77 % and 0.73 %, respectively. As for the interpretation of 0.75 % of the CPI of the Restaurants and Hotels group, it responds to the increase in the prices of the services of meals prepared outside the home as the dish of the day (0.59 %), chicken service (0.94 %) and service of groceries with accompaniment (0.87 %) and empanadas (1.49 %).

Inflation of tradable and non-tradable goods

The CPI of tradable goods, which can be exported and imported free of restrictions, varied by 1.09 % in December, concerning November 2022. On the other hand, the price index of non-tradable goods and services, which by their nature can only be traded within the economy that produces them or are subject to measures that limit imports of these, grew 0.83 % in December 2022.

The BCRD report indicates that the behavior of the price indexes by socioeconomic strata shows that the lowest income quintiles, i.e., 1, 2, and 3, registered variations of 1.05%, 1.04%, and 0.97%, respectively, mainly due to the greater relative weight of food in the baskets of the referred quintiles, with the variation in the indexes of miscellaneous goods and services, also having an impact. As for the higher income quintiles (4 and 5), these showed inflation rates of 0.92 % and 0.89 %, respectively, which are explained to a greater extent by the behavior of the price indexes of food, air transportation services, vehicles, personal care items and services, and food services outside the home.