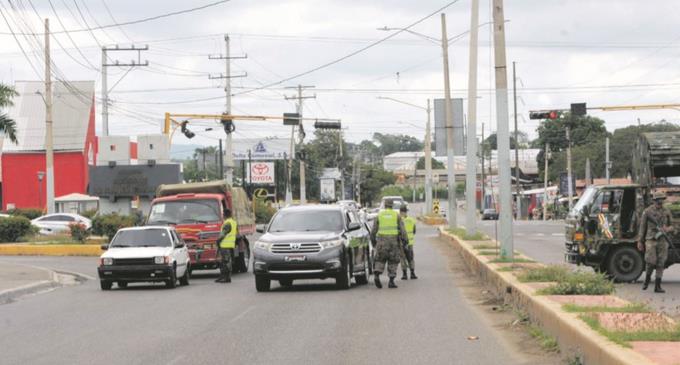 Military and police yesterday controlled the entrance to Santiago on the Joaquín Balaguer highway. ONELIO DOMÍNGUEZ

The provision that prohibits travel to the interior of the country during this Easter limiting the transfer from one locality to another at any time of day while the quarantine remains for Covid-19 is causing difficulties and discontent in some provinces.

Yesterday it was reported from Santiago that Army personnel were requisitioning vehicles that entered and left that province, preventing entry to those who did not reside in that town.

The military crossed a truck on the Joaquín Balaguer highway, at the same entrance to the city, preventing the passage of drivers and drivers who were preparing to enter Santiago, from the Northwest region and Puerto Plata.

Members of the Army only allowed entry to those who could demonstrate that they live in that city, as well as those vehicles that transported food products, medicines, fuels, protective equipment against the coronavirus. Or that they have some type of permission to transit in these days of quarantine.

Authorities ordered the measure in other provinces and municipalities of Cibao, to prevent the spread and contagion of Covid-19. At the same time, the mayor of Santiago Abel Martínez has put a kind of barrier in the entire environment where the primary market of Hospedaje Yaque works so that sellers and buyers do not enter the area, which has caused discontent among merchants.

Last Monday, Greater Santo Domingo woke up blocked by the military and police officers. Authorities placed checkpoints at the main points of entry to the National District, including the Juan Bosch, Juan Pablo Duarte, Flowering Bridge, and Jacobo Majluta Avenue, which caused significant blockage and discontent of the public.

Authorities from various towns also made the decision to block the entry of people who did not justify their presence.

The Minister of the Presidency, Gustavo Montalvo, reported on Friday the prohibition of travel to the interior of the country during this Easter, except for the transport of essential goods. Nor should non-essential traffic travel from one locality to another, so there shall be checkpoints with police and military at the entrance of each municipality.