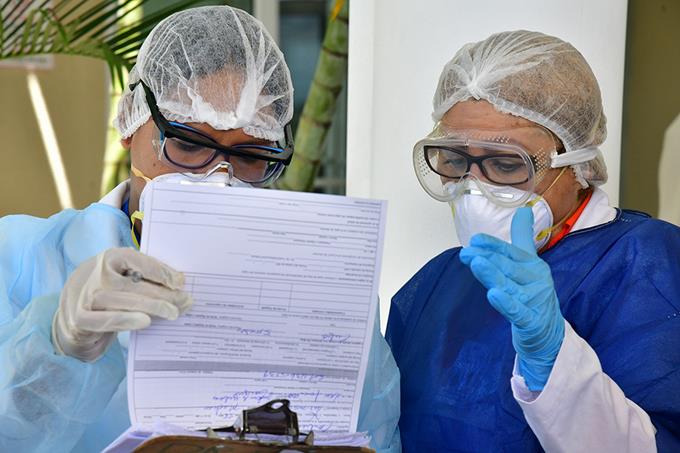 The capital and Santiago have most new infections.

With just 141 confirmed positive cases, the Duarte province continues to contribute the highest number of deaths due to COVID 19 in the country, with 33 deaths registered to date, of the 98 reported by the country at the national level. In contrast, the number of cases rose yesterday to 1,956 confirmed.

In the epidemiological bulletin, 19 released yesterday by the Minister of Public Health, Dr. Rafael Sánchez Cárdenas, 12 new deaths were reported in the last 24 hours. Seven occurred in the Duarte province, the first to present community transmission of where the most diverse family testimonies of pain and the overwhelming of health services arise.

As of yesterday’s report, 98 deaths have been reported in the country to date, 12 more than the previous day and 1,956 confirmed cases, 128 more than the record released on Monday, in a month and seven days of the presence of the virus in Dominican territory.

Of the 128 confirmed new cases, Santo Domingo and Santiago add 95 new ones, for a cumulative total of 1,282 confirmed cases between them.

Other provinces with the highest numbers of confirmed cases are Monsignor Nouel with 39; Espaillat with 46; La Vega with 109, Puerto Plata with 38; Mirabal sisters with 23; San Cristóbal with 34 and La Altagracia with 44.

Among those affected are 55 health personnel, of whom 36 are in Santo Domingo.

In this line, the Minister of Public Health revealed that many centers are leaving the care of COVID-19 in the hands of resident doctors (in the training of different specialties), and that has weakened the capacity and resolution of many of the hospitals.

He assured that measures had been taken in health centers, where he admitted that there is a shortage of specialized personnel. A large part of the doctors appointed in health centers in the public network accepted the situation of avoiding COVID-19 areas if over 55 years old and for having some underlying disease, such as hypertension or diabetes. Others have stopped giving face-to-face assistance out of concern of becoming infected with the virus.

He said that of the 98 deaths that have occurred in the country due to COVID 19, 98% had the confirmed disease. “A good part of these problems is due to the lack of human resources based on the demand,” he said.

36 patients have already recovered from the virus in the country and 3,864 cases have been ruled out through laboratory tests carried out on people throughout the national territory.

Oraida Herrera Díaz, the Dominican resident in Italy who has her home in Villa Riva, Duarte province, has already been discharged because she is negative for the coronavirus.

Herrera Díaz captured the country’s attention as the first confirmed patient to be in at home isolation, but he had to be apprehended. He was detained at the Ramón de Lara military hospital.