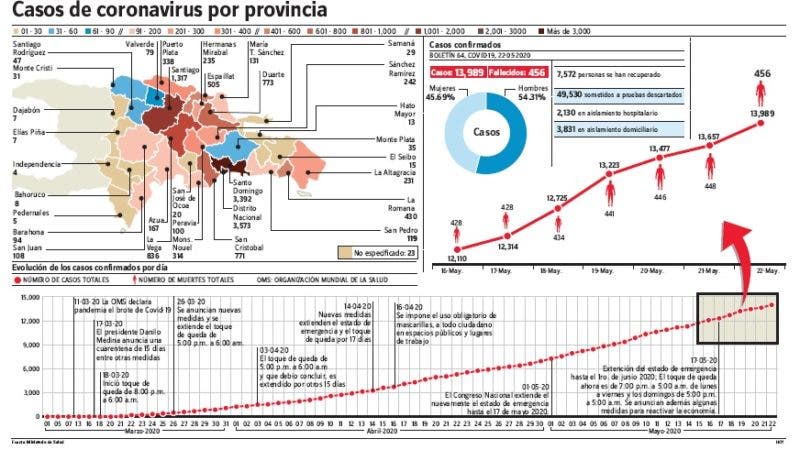 In Greater Santo Domingo and San Cristóbal, a large part of the 332 new cases of Covid-19 reported yesterday occurred. The accumulated number of cases is 13,989, with 456 deaths, of which eight are newly recorded fatalities.

The National District registered 83 new cases, Santo Domingo 143 and San Cristóbal 28, for a total of 253. The remaining 29 provinces reported ten or fewer infections yesterday. Of the total of new cases, there are 23 pending territorial confirmation.

While of the deaths, there were two in Santo Domingo and two in the National District, La Vega. Sánchez Ramírez and Montecristi each have one.

Seven thousand five hundred seventy-two people recovered from the coronavirus, and there have been 49,530 suspected cases discharged from a total of 63,519 samples processed by PCR.

Almost half the samples processed have been in the National District with 16,441 and the province of Santo Domingo with 14,692.

The data contained in bulletin number 64, applies up to the 21st of this month, released by the Minister of Public Health, Rafael Sánchez Cárdenas.

The minister highlighted that the positivity rate in the samples processed during the last four weeks is 19.33%, which shows a progressive decrease as well as the case fatality rate, which stood at 3.26% of the sample base data yesterday.

Sánchez Cárdenas specified that among the deaths, with an average age of 65, they had a history of morbidity from arterial hypertension (26.32%) and diabetes (21.93%).

Of the confirmed cases, 3,831 people are in home confinement, 2,130 in hospital isolation, and 565 hospitalized. Only 113 of the hospitalized people are in intensive care units (ICU), and of these, there are 57 that are under ventilation, according to Sánchez Cárdenas.

These localities concentrate 11,349 of the cases for 81% of the total.

Incidence. With 3,573 accumulated and 71 deaths, the National District remains in the lead with the highest incidence rate of 342.51 per 100,000 inhabitants. In second place is the Duarte province, with 84 deaths and 773 confirmed cases with an incidence of 258.6.

Notification. The minister again demanded from the authorized laboratories to complete the form provided for the registration of the processed samples of PCR. That must establish the type of test and specimen used for it.

“We have insisted on this, and we will give time for all the institutions accredited for these purposes to adjust to the National Epidemiological Surveillance System,” he said.

Three times per week. At another point, Sánchez Cárdenas announced that the meetings with the media and citizens through web conferences would be held only on Mondays, Wednesdays, and Fridays.

However, he indicated that the bulletins would continue on digital platforms, the website of the Ministry of Public Health, and the Epidemiology Directorate. On the other hand, he highlighted the start yesterday of the containment plan for the coronavirus in La Romana, after an outbreak with 90 cases occurred in prison.

The Health Minister reiterated to the population to maintain preventive measures to reduce Covid-19 infections.