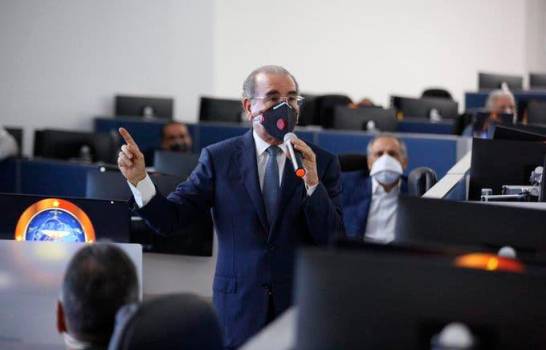 Danilo during the inauguration of the C5i, a center to monitor the behavior of COVID-19. (EXTERNAL SOURCE)

69% of people approve of the work that the President of the Republic, Danilo Medina, during the COVID-19 pandemic as revealed by the survey by the Mark Penn Stagwell firm, presented this Friday by the SIN Group.

In addition, the survey affirms that satisfaction with the president’s work has risen from 59% to 69%. While 29% are dissatisfied, and 2% do not know.

According to the survey, presented by the economist and historian Bernardo Vega, director of the firm in the country, the president’s work is approved with 73% by women, 69% by independents, 36% by supporters of the Modern Revolutionary Party (PRM) and 41% of those of La Fuerza del Pueblo.

Vote in the middle of the pandemic

56% of respondents say they will go to vote on July 5, despite the COVID-19 pandemic; 38% indicate that they would not be willing, while 6% do not know.

The survey was carried out on a sample of 1,000 people who were contacted by phone from a universe of 20,000 phone numbers of people chosen from the electoral roll and verified that their numbers corresponded to them, Vega explained.