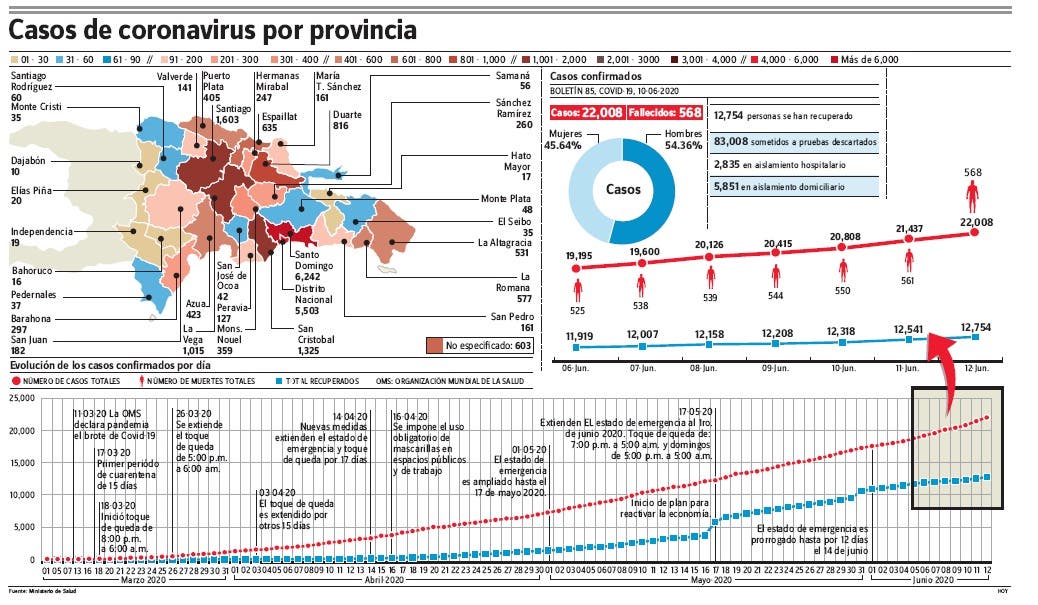 Of the 22,008 people who have tested positive for covid-19 in the country, 12,754 have recovered, 568 have died, and 8,686 remain active. The information is contained in bulletin number 85 issued by the General Directorate of Epidemiology, which registered seven new deaths yesterday for a total of 568.

Also, during the last 24 hours, 571 new cases were registered and 2,516 PCR tests were performed, informed when giving a virtual reading to the bulletin, the minister of Health, doctor Rafael Sánchez Cárdenas.
The system also reached 105,016 tests, but shortages persist in laboratories such as Reference and Amadita, both national. 2,835 people with covid-19 are kept in hospitals, while 5,851 are in home isolation. The case fatality rate is at 2.58%

The numbers: Greater Santo Domingo has the highest recorded number of deaths with 109, observes the Bulletin. Until yesterday, 590 people were interned in different hospitals, of which 114 are still in intensive care units, which represents 19.3% of the total of those hospitalized, and of these 61 with mechanical ventilation. Of the 114 patients in intensive care units, 57.26% are in centers in Greater Santo Domingo, 32.26% in Santiago, and 5.65% in the Duarte province, in the North.

Most of the cases are found in Greater Santo Domingo, with 53% hospital occupancy.
The head municipality of the Duarte Province, San Francisco de Macorís, presented a single confirmed case and 10 inmates, six of them in intensive care units, two in mechanical ventilation. That area has 145 beds available.