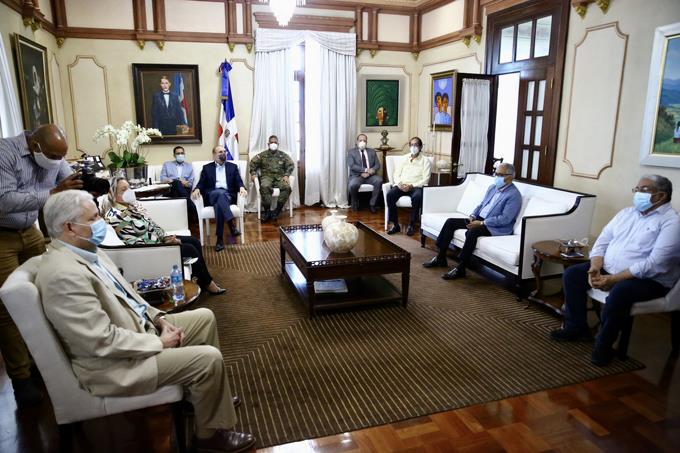 The members of the Committee met yesterday with President Danilo Medina.

Just three days before phase 3 of the de-escalation of the measures adopted in the face of the coronavirus boom begins, the government has been forced to announce that it will tighten the restrictions to try to stop the contagion, which during phase 2 has registered a dizzying increase in deaths and newly infected in the country.

This increase in deaths and contagion by coronavirus caused a meeting of the Emergency and Health Management Committee to Combat Covid-19 with President Danilo Medina, in which they made the decision to “tighten” prevention measures to try to control the spread of the global pandemic.

According to government predictions, phase 3 should start on June 17 and the fourth on July 1, four days before the presidential and legislative general elections.

Among the measures, the Committee cites the mandatory use of the mask, compliance with the distance, and that businesses abide by the protocols of these measures, as well as that companies comply with the rigor of taking the temperature of employees when they enter to carry out their tasks.

“We have determined the need to increase general preventive measures such as the use of a mask, physical distancing, and handwashing,” said Amado Alejandro Báez, executive director of the Committee.

Báez expressed that the population must understand the mandatory use of a mask as an instrument for the prevention of the virus in the country since it is “a basic measure, very effective, but incredibly necessary.”

“These collective sacrifices are now more important than ever. We have to tighten those preventive measures to continue successfully the course of managing the coronavirus,” said Báez.

He stated that there is the possibility that asymptomatic patients can transmit the disease, “therefore, preventive measures must always be followed. Use of mask, hand washing, physical distancing,” said Báez.

He admitted that collective sacrifices are more important now than ever. “We have to tighten those preventive measures to successfully continue the course of coronavirus management.”

After the meeting, doctors Jorge Marte Báez and Amado Alejandro Báez spoke at a press conference, who explained that the efforts are aimed at flattening the contagion curve and especially at increasing capacity in the health system.

The increase in cases and deaths due to coronaviruses has led the Government to organize new interventions in some provinces of the country, such as Greater Santo Domingo and San Cristóbal, as determined by the Committee for Emergencies and Health Management to combat COVID-19, in a meeting with President Danilo Medina.

“The operations that we are going to carry out in Greater Santo Domingo, in the National District and San Cristóbal will be communicated later. Similarly, operations and plans that are being articulated in other provinces such as La Altagracia and the Punta Cana-Bávaro tourist area,” reported Dr. Alejandro Báez, director of the Committee.

The authorities had intervened last May in Greater Santo Domingo, San Cristóbal and La Romana, due to the number of cases registered in these demarcations. The
confirmed cases of coronavirus until Sunday totaled 22,962 with 3,002 new this past week and deaths stood at 592, with 54 in seven days.

Báez explained that “there are percentages of patients who will be asymptomatic, minimally symptomatic who have Covid-19 who can transmit this disease, therefore preventive measures must always be followed.

Báez said that although the percentage is lower, patients who are going to require hospitalization, home follow-up to see the evolution of the disease and hospitalization at a critical level should be considered.

You have to answer

He stated that the efforts are guided, not only in the flattening of the curve but in the strengthening of the capacity of the health system,” said Báez, while highlighting the public-private effort to control the pandemic in the country,” therefore who believed that collective sacrifices are now more important than ever.