Deaths from viruses escalate with reopening in Dominican Republic 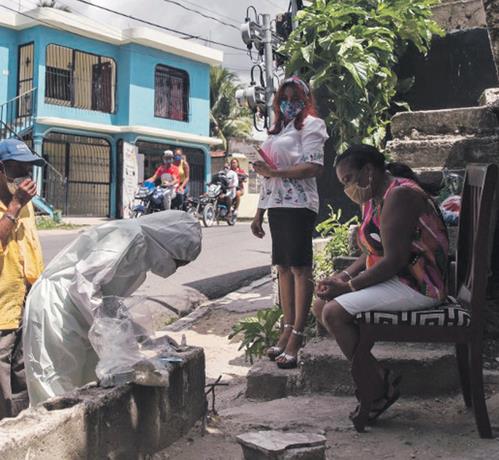 Authorities are trying to take preventive measures to prevent the spread of the coronavirus at the gates of the third phase of the reopening. AFP

In just 14 days the country reached 100 new deaths from COVID-19, of which 37 were reported in the last 72 hours, to record a cumulative 605 deaths since the start of the epidemic on March 1st.

Of the new cases of deaths, 13 were recorded in the report yesterday, 15 the day before and 13 last Saturday. The increase in mortality and confirmed cases of COVID-19 is recorded as the country prepares to start the third phase of the economic and commercial de-escalation tomorrow.

The special epidemiological bulletin number 88 on the behavior of the epidemic in the country released yesterday by the Minister of Public Health, Dr. Rafael Sánchez Cárdenas, establishes that the number of confirmed positives also continues to increase with the sum of 309 new cases in the last hours for a national accumulated total of 23,271, of which 14,025 have overcome the disease and 8,641 cases are active.

Positivity
The positivity rate in the processed samples, during the last four weeks, is 18.29% and the case fatality rate is 2.60%.

Of the confirmed cases, 2,702 are in hospital isolation and 5,939 in home isolation. Of 704 patients hospitalized in centers and hospital beds under monitoring, 145 patients are in intensive care units (ICU); 57.24 percent in centers of Greater Santo Domingo, 30.34 percent in Santiago, and 3.45 percent in Duarte. Some 26 people have been discharged.

In total, 219 health workers have been positive for COVID-19, of which 142, equivalent to 64.84 percent, corresponding to the female sex. The case fatality rate remains at 2.60 percent.

Masks
Given the increase in positive cases and deaths that have been registered in recent days, the Minister of Public Health drew attention to the need for the population to be rigorous in the application of the established prevention measures and indicated that it will request the President of the Republic more drastic actions that include penalties for those who do not wear the mask.

Sánchez Cárdenas informed that an awareness campaign will be launched, through various means of communication, based on the acts of individual responsibility that citizens must comply with to protect themselves and others from contagion, during the so-called ‘covidianity.’

Inside
He called on citizens to avoid traveling inland to visit relatives due to the high risk of contagion. “We want to draw attention to all the people who move to the interior to visit their relatives, with few protection measures, without respecting physical distance and crowding,” she said.

Recommendations.
Dr. Sánchez Cárdenas recalled that the permanent recommendations are; the physical distance between people, the use of masks, and constant hand hygiene.