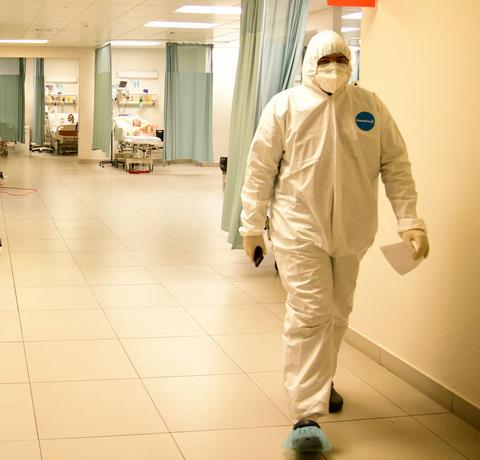 The occupation of hospital beds continues to increase in the country. DAILY LIST

The percentage of positivity of the Covid-19 virus continues to increase in the country, especially as a result of the economic de-escalation, reaching 22.11 percent in the last four weeks, which indicates that for every 100 laboratory PCR tests that were processed, more than 22 tested positive for the virus.

While among the provinces with the highest percentage of positivity are those located on the border with Haiti, being led by Independence with 55.15%; Pedernales with 53.7%; Elías Piña with 35.65% and Dajabón with 32.29 percent.

The percentage of positivity is calculated with the number of confirmed cases and the number of tests carried out, and the World Health Organization (WHO) suggests keeping it below 10%.

About 810 new cases of Covid were diagnosed in the country in the last hours and 11 new deaths, while the occupation of hospital beds continues to increase, being yesterday at 63% nationally and 74% in Greater Santo Domingo, where the demand is higher.

According to a special bulletin, 105 of the General Directorate of Epidemiology released yesterday by the Minister of Public Health, Rafael Sánchez Cárdenas, 34,197 cases, and 765 deaths have been confirmed to date in the country, with the addition of 11 new one’s yesterday. The total recovered is 18,141 while 15,291 remain active, of which 11,863 are in home isolation.

Greater Santo Domingo is the province that accumulates the most positive cases and deaths, with more than 19,000 confirmed cases and 312 deaths. Of the total of deceased 529 are men.

Yesterday 982 people were hospitalized in the centers under monitoring, of which 200 patients, that is, 20.36%, were admitted to intensive care units. 102 were ventilators or assisted breathing. The occupation of hospital beds nationwide in the centers monitored by the system was 63% and 56.8% in intensive care beds, according to the details offered by the Minister of Public Health during the press conference to update Covid’s behavior in the country.

In La Vega the number of hospitalized patients was 84 for an occupation of 57% of the 135 beds monitored, nine patients were in ICU, of 36 beds available for 25% of occupation, and five of which were under ventilation.

The Minister of Health reported that a module was created for online consultation of the results of the tests carried out at the Dr. Defilló National Laboratory.

Patients can check the results through the web using their ID and number assigned to the sample taken.

He also informed that the channeling of appointments will be made through an exclusive telephone line to answer the demand that corresponds to (809) 780-7300.