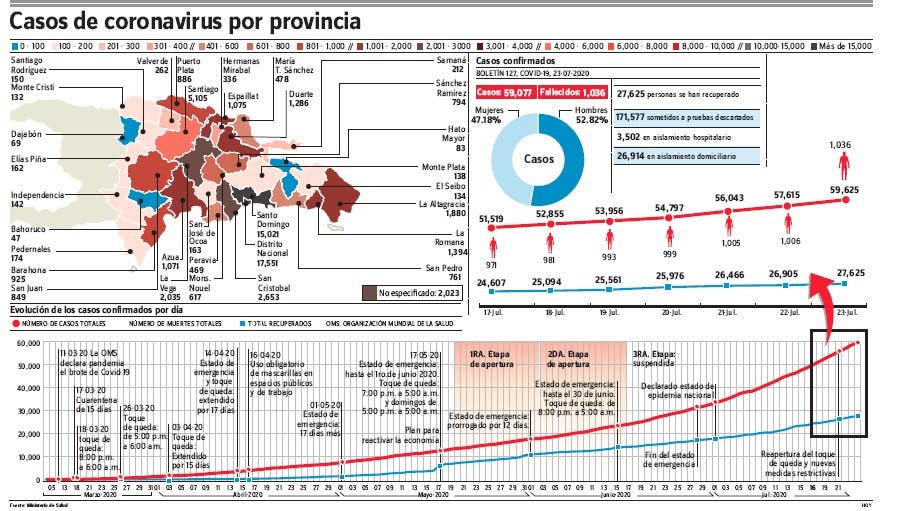 96% of the beds intended for patients with covid-19 are occupied in the Dominican Republic, while the number of new cases once again broke a record, with 1,462 and 30 deaths reported in the last 24 hours. Likewise, the number of seriously ill patients in intensive care units at 252, of that number, 115 people are connected to assisted ventilation.

What most worries the population is the high contagion and the number of beds occupied, which was 96% yesterday. The information was provided yesterday by the Minister of Health, Dr. Rafael Sánchez Cárdenas.

Reading the 127th bulletin issued by the General Directorate of Epidemiology, a dependency of the Ministry of Public Health, the official said that the positivity rate is 31.83%. This means that of every 100 Dominicans who undergo PCR tests for detection of covid-19, 32 are positive for the disease.

For the cut of July 23, 1,438 patients were admitted to hospitals and clinics, of which 252 are in intensive care units, which represents 69.23% of occupancy in those units.

Of the critically ill patients, 115 are under ventilation, equivalent to 45.6% of ventilator availability, the official said.

Relevant data The active cases of covid-19 add up to 30,416 and the recovered 27,625, which means that the active number is 2,791 more people than the recovered are with the respiratory viral disease.

The data implies that only 46.76% has recovered, while active cases represent 53.24%, it can be reviewed

As of July 23, 2020, in the Dominican Republic, 59,077 confirmed cases have been reported, 1,462 new and 3,502 are in hospital isolation or the diagnosis was made from a hospital. Likewise, 26,914 people are in home isolation, 27,625 recovered, and 1,036 deceased, with 30 deaths reported within 24 hours. Likewise, the case-fatality rate stood yesterday at 1.75% per million inhabitants, the case-fatality rate is 99.15 and for every one hundred thousand inhabitants it is 9.92, reveals official information, offered by the Ministry of Health.

Greater Santo Domingo Of the 252 patients who are in intensive care units; 41.67% in clinics and hospitals in Greater Santo Domingo, 32.94% in Santiago, and 15.08% in the Duarte province, whose most affected municipality is San Francisco de Macorís.