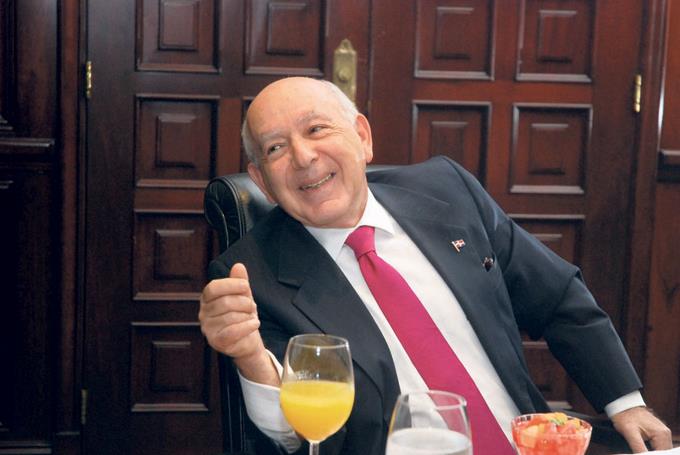 The Dominican ambassador to London, Hugo Guiliani Cury, during the interview with Listín Diario.

The Dominican Republic is not among the 75 countries that are interested in joining forces to receive a portion of the 2.2 billion doses of vaccine to prevent Covid-19 that AstraZeneca-Oxford is developing, reported Hugo Guiliani Cury, Ambassador of the Dominican Republic to the United Kingdom of Great Britain and Northern Ireland.

In an interview for the Listin Diario, Ambassador Guiliani Cury gave extensive details of the vaccine development process and the countries that were initially beneficiaries.

I do not know the reason why we do not want to realize that the pandemic we are facing is a crisis of an unsuspected magnitude.

While in London, January 2020, we learn what happened in China and other countries in Asia. The subject attracted me and I began to read and attend meetings on this subject. I gradually formed a clear idea and continued to document the policies implemented by China, South Korea, and Singapore. Those were the successful countries. I wrote some articles for our press and recommended that we follow the example of those nations.

It was obvious that international cooperation was needed to combat this pandemic. I made attempts and wanted a proposal to be brought to the UN Security Council. But the differences in that Council between China and the United States would impede any initiative. The same happened in other scenarios due to the differences between the United States and the World Health Organization (WHO). International and bilateral aid to the world never appeared and each one had to solve with his own means.

Our country with scarce human and financial resources adopted policies to combat COVID-19. I think we have done well. Our doctors, regarding the treatment phase, have been very effective and successful against the thousands of deaths that occurred daily in rich countries and advanced medicine. That happened because some of our best doctors decided to try some medications. They were successful and that is why we have a low case fatality rate. Just as I say where we have been very good, I must say where we have failed.

I wish that a state of emergency had been declared since March 1st. Likewise, more tests were done, with less bureaucracy, more focused, and with greater tracking. I was not, nor am I in favor of openings during the day and closes at nights. COVID-19 is contagious 24 hours a day. I also sometimes felt a lack of authority and a lack of cooperation from my fellow citizens. But I was always aware that the authorities were doing their best. I know very well that it is one thing to play the guitar and another with the violin. Therefore, I imagine the difficulties that the High-Level Commission had against the virus in the instrumentation and operation of the measures adopted by them.

That is the dilemma, open or close. Sometimes when you cannot find a solution to a problem, you must pause and help yourself with the experiences and wisdom of others. I did that and in past weeks I found some articles by the famous writer Yuval Harari, who is the author of the book “Sapiens”. His essay was as refreshing for me as one of those baths that I take in Villa Miriam, in the waters of the San Rafael River.

Harari touched on crucial issues about the immediate future of our world, including that of biometric surveillance and our intimacy. But the issue that concerns us now is about his focus on how to defeat this virus.

Harari indicates that there are only two ways to achieve this. One of them is a complete closure where the government must exercise all its authority and punish those who do not comply. It is a modality where authoritarian surveillance is implemented with the empowerment of citizens. That is a closure of the economy where a strong hand and discipline are applied. The first thing according to Harari is health, the economic reactivation is done after the pandemic has been controlled. The second solution that Harari gives us is to share all the information with the rest of the world and try to obtain effective international cooperation.

The first solution that Harari recommends is not possible given how little we are disciplined and the type of regime we have. And neither is the second suggestion. In this crisis, the absence of the international community has been absolute. The United Nations Security Council did nothing and was paralyzed by the confrontation between the United States and China. The World Health Organization, which was supposed to have been at the forefront of a crisis of this nature, lost US support and resources, and did nothing. The G’s, be they 7 or 20, did not work and President Trump declared them obsolete. In other words, post-pandemic multilateralism has fallen into a crisis. The world needs a new vision and better institutions at a global level, but this will not happen in the short term either.

At the end of the story, the only solution for this pandemic is to find a vaccine. It seems that the main scientific centers worldwide are close to being able to launch a vaccine on the market. Currently, some twelve laboratories are close to reaching that goal. It is estimated that three of them will be able to do so before the end of this year. These are CanSino Biologics in China, AstraZeneca – Oxford University in the United Kingdom, and Pfizer Pharma in Germany.

At AstraZeneca – Oxford, they think that the vaccine could be on the market in September of this year. In this phase, they will produce about 2.2 billion doses. That amount is already committed as follows:

– 100 million doses for the United Kingdom

– 300 million doses for the United States

– 400 million doses for the European Community

The sum of these items is the total production that AstraZeneca – Oxford will have in this first phase. This means that our countries will only be able to access this vaccine in a small proportion. These will be those coming from the 300 million doses that were assigned to Covax – Gabi, which will be distributed worldwide. To date, some 75 nations have expressed interest in joining the facilities of this alliance for the vaccines assigned to Covax – Gabi. The Dominican Republic does not appear in the list of the 75 countries that have made commitments

The letter had a good impact inside and outside the country. A few days ago I had a video conference with two of the editors of British Vogue magazine in London. It was a constructive conversation where we clarified the positions. I think positive things will come out of this impasse and as for Vogue, the country has gained an influential friend.