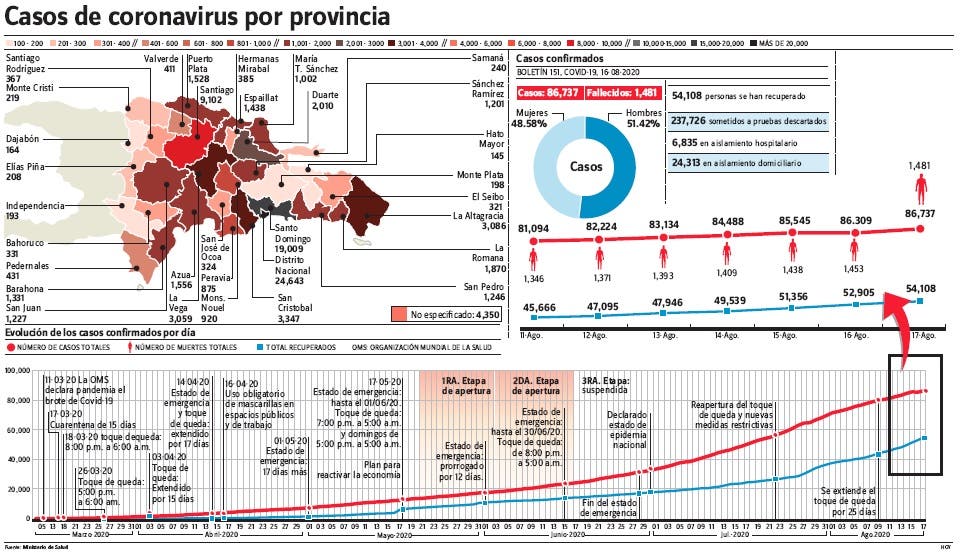 Yesterday, the epidemiological system notified 28 new deaths from covid-19, while the number of new infections is lower, with 428 people with the disease.

Likewise, the epidemiological system yesterday registered 86,737 cases of infected people and 1,481 deaths, with the 28 accumulated.

The information is contained in bulletin number 151 issued by the General Directorate of Epidemiology, a dependency of the Ministry of Health.

Critical care Until yesterday’s report, 295 people were reported positive for the viral disease in intensive care units. 43.73% are in Greater Santo Domingo centers, 26.78% in Santiago, and 25.08% in the Duarte province. Likewise, all cases’ median age is 38 years, with a range of 28 to 52 years.

The official report ensures that in the last 24 hours, 2,407 samples of covid-19 were notified, which are added to the release of 324,463 tests processed for diagnosis.

The coronavirus fatality rate is 1.71 percent, and the positivity for the past four weeks is 31.33 percent.

At least 295 people are admitted to intensive care units (ICU), with 43.73 percent in Greater Santo Domingo centers, 26.78 percent in Santiago, and 25.08 percent in Duarte.

The average age of those infected is 38 years. 51.42 percent are men, and 69.89 percent of the cases are concentrated in 12 municipalities of the country, the bulletin reads.

The positivity in the processed samples reached 31.33% in the last four weeks,

Demarcations The province with the highest number of cases continues to be the National District, with 133 new cases, six deaths, and 273 deaths from covid-19.

The Santo Domingo province has some 105 new cases of covid-19, it also has seven further deaths, for a total of 357 deaths.

The Santiago province has 42 new cases, four further deaths and a total of 193 deaths.