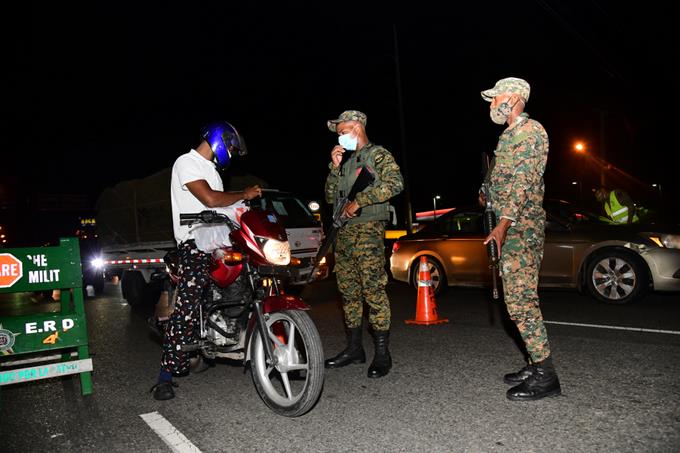 The Ministry of Defense (MIDE) has ordered the general commanders of the Army, Navy, and Air Force of the Dominican Republic to take actions to enforce the decree that establishes the new curfew hours, social distancing, and the mandatory use of masks in all public and private spaces.

Lieutenant General Carlos Luciano Díaz Morfa, head of the military entity, instructed the three military branches to enforce “strict compliance” with the measures, precisely everything established in Decree 431-20 issued by President Luis Abinader, in the one that sets the new curfew time.

In turn, the highest military position in the country ordered its forces to “demand due to compliance” from the civilian population, from their respective areas of responsibilities. Soldiers from the three Dominican military branches participate, together with agents of the National Police, in checkpoints, patrols, and other surveillance actions to control the movement of people and vehicles, and activities in public spaces.

In a statement released yesterday by the Ministry of Defense that Minister Díaz Morfa’s disposition extends “to special instances of coordination of the operations of the Armed Forces, such as the Unified Joint Command and the Metropolitan, East, and South Joint Commands and North.”

Also given exceptions are vehicle operators and technicians from companies and institutions that provide energy, water, telecommunications, and solid waste collection services. Additionally, exempt are vehicle operators for urban and interurban distribution of goods, supplies, and fuel. All such sector workers must be identified, and exemptions are only effective during your job duties.

Those who work in the industry and trade of food, medical, and pharmaceutical products in transit to or from their work centers, international passengers and operators of private or commercial vehicles in transfer, and employees of the maritime and air transport sector may circulate.

On the other hand, Rear Admiral Luis Rafael Lee Ballester, director of the C51 intelligence center of the Defense Ministry, said yesterday that Minister Carlos Luciano Díaz Morfa had given precise instructions for them to proceed with the elaboration of a protocol that enforces the measures provided by President Luis Abinader, related to the hours and permits of people authorized to circulate during the curfew, to prevent the spread of the coronavirus.

He explained that this protocol establishes the verification and validation of circulation permits so that only those who have justification can transit during the curfew.