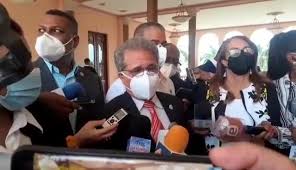 The resurgence of coronavirus cases in the country is due to the government’s incorrect action to modify the state of emergency, sending a subliminal message to the population that the pandemic’s situation had improved.

This is according to Waldo Ariel Suero, president of the Dominican Medical Association (CMD). He said that the guild had warned the authorities that a resurgence of the coronavirus and subsequent overwhelming of the health system could occur when the cases and admissions had dropped.

He said it was the wrong attitude because they wanted to reactivate the economy, but with the spread of the disease, what they are doing is deactivating it instead.

With this modification to the state of emergency, in which the curfew was from 7:00 pm and was re-established from 9:00 pm, the CMD president understands that there was “a lack of respect for proper social distancing measures. We now have what we saw coming, although the resurgence is not immediately established because we have to give it 10 to 15 days after the incubation of the disease to know its full scope.”

He said that just during the long weekend, for the Day of the Virgin of Mercy, a hotel was packed with people without distancing or protection measures.

The CMD proposed a meeting to take the measures of various locales and gather a more complete knowledge of the population. While “many know the measures, few apply them with proper precaution and care.”