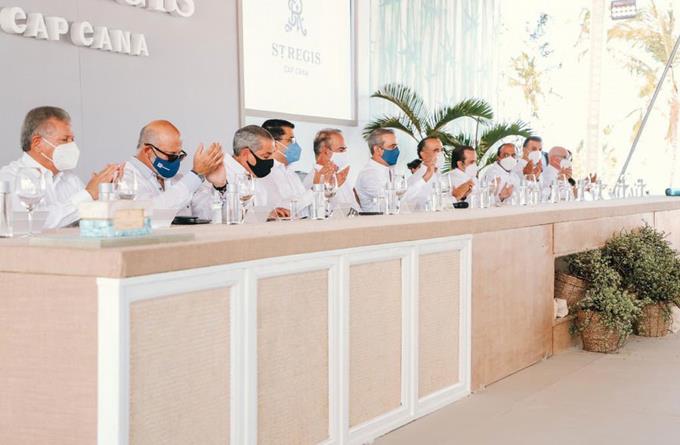 President Luis Abinader met with businessmen from the tourism sector of Punta Cana and Bávaro in the La Altagracia province. EXTERNAL SOURCE

President Luis Abinader highlighted yesterday that the Dominican Republic is prepared to receive many tourists who usually visit the country each year.

He said that at the moment, the country has the Covid-19 pandemic under control, thanks to the measures that have been adopted and the efforts of health professionals, especially doctors, nurses, and bioanalysts.

At the head of the opening ceremony of the new Medical Arts building in Bávaro, La Altagracia province and assessing the quality and professionalism of the country’s health personnel, the head of state stated that “it has been demonstrated in the treatment of Covid, which today it’s under control in the Dominican Republic.”

Abinader said that the country could maintain that control, especially with the necessary human assets, excellent doctors, nurses, and bioanalysts who work at the national level, according to a press document.

“We are prepared to receive the large number of tourists who usually visit Punta Cana and the country, as the statistics say, with greater security than in the countries where they come from,” he stressed.

President Abinader congratulated the owners and partners for this work, which adds quality and confidence and is a complement to tourism services and has international quality certifications.

He said that “you are an example that medicine in the Dominican Republic can be at a world level and quality.”

Meanwhile, José Natalio Redondo, president of the Rescue Group, expressed his satisfaction at “becoming the first General Hospital in the Dominican Republic with international accreditation.”

The Professional Building for Medical Arts has five levels, where service areas and parking lots are distributed.

The building, which has 7,600 square meters and five levels, houses imaging services, a laboratory, and 42 medical specialty offices, where all the outpatient services of the Punta Cana Medical Center are installed.

The event was attended by the Administrative Ministers of the Presidency, José Ignacio Paliza; of Public Health, Plutarco Arias, and Tourism, David Collado.

In another order, Abinader highlighted the growth and investments present in the destination city, highlighting its positioning as a country brand.

He considered the sustained growth and investments made in this tourist, hotel, residential destination, and positioning as a country brand.

The Head of State toured different areas of the destination with Fernando Hazoury, Chairman of the Cap Cana Board of Directors. He also toured several of its sites under development, including the Cap Cana Marina and the Margaritaville hotel’s advanced construction.

He stated that “Cap Cana is a project that has had a significant development for more than a decade.”