Clandestine parties and lack of control in the neighborhoods, weak point of the curfew 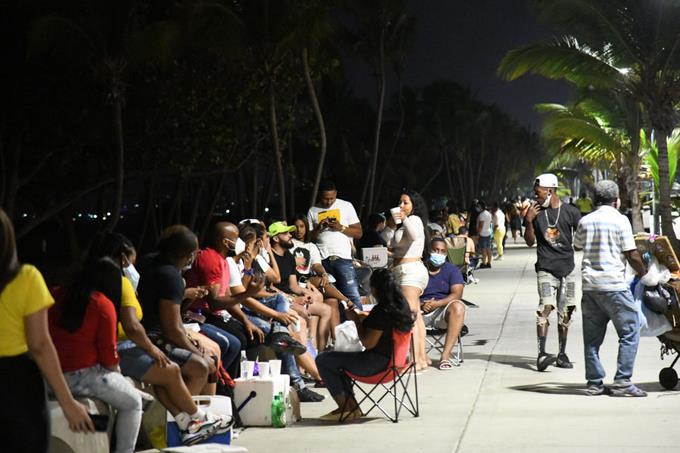 Since mid-March, the Dominican Republic has lived under a curfew for the coronavirus, except for two weeks for the presidential and July 5th congressional elections.

The objective of the measure has been to restrict the movement of people to curb contagion. However, the curfew’s rejection has been a common denominator among many citizens every time the government announces an extension. As time goes by, Dominicans have been looking for ways to mock the authorities and continue their social festivities.

Popular neighborhoods don’t respect the schedule.
Every weekend it has become routine to wait for the videos on social networks in different areas of the country by disrespecting the curfew schedule while sharing alcoholic beverages and hookahs. This also violates the social distancing and the mandatory use of masks.

Although the authorities have stopped the celebrations on several occasions and arrested several of the participants on other occasions, the large crowd has managed to repel the patrols trying to enforce the extraordinary measures to prevent the spread of Covid-19.

One of the confrontations between citizens and police took place in the Borojol sector of the capital, where a team of reporters from Listín was pelted with stones. In Villa Faro, police units and civilians clashed when the former tried to prevent a popular celebration in that community’s streets.

The clandestine parties, the new modality
In this last stage of the governmental disposition, the so-called “clandestine” parties have been the trend during the previous days.

The first of these cases to go “viral” on social networks was a party held in Santiago’s Tamboril community, where some 40 people were arrested for participating in the party and violating the curfew.

Among those arrested were urban music exponents Shelow Shaq (José Luis Peralta) and Musicologist (Ygnacio Alberto Santiago) and several musicians from Omega, who were ready to liven up the party. Michael Miguel Holguín, the communicator, was designated as the animator of the activity.

The authorities also detained five vehicles during that operation, and those arrested were taken to Santiago Air Base, where they were fined accordingly.

Another case that reverberated in the nets was closing “El Juidero,” a clandestine bar that operated in Los Platanitos, Santiago, under the facade of the “Pentecostal church, road to the sanctity of Los Platanitos.” The National Police carried out a raid after the constant calls made by the inhabitants of the sector. Also, in Santiago, the authorities dismantled a party held at a private hacienda in the Gurabo sector, where 32 people were arrested.

The blonde of the curfew
Another of the protagonists who have had the curfew is Rosa Yrcania Marte Puello, known as “The blonde with the curfew,” who took the public showcase after a video was released last September in which a patrol stopped her and let her go because she presented a permit to circulate in this schedule. Then the young woman posted a video on her Instagram account, assuring that she would go out again. The company Metro Gas, where she worked, withdrew her permit because of the controversy and later reprimanded her.

The current curfew
On October 18, the current curfew began, which was only extended for 25 days by President Luis Abinader. It will end on November 12. However, if the government so decides, it can be lifted until December 3, when the current state of emergency ends.

During curfew hours, only people related to essential activities and services may circulate, including doctors, nurses, nursery nurses, bioanalysts, paramedical and pharmaceutical personnel, people affected by a medical emergency, people dedicated to security work duly identified, and members of the press duly accredited.

Other groups authorized to circulate during the curfew are vehicle operators and technicians of companies and institutions that provide energy, water, telecommunications, and garbage collection services, duly identified, exclusively during the exercise of their work duties.