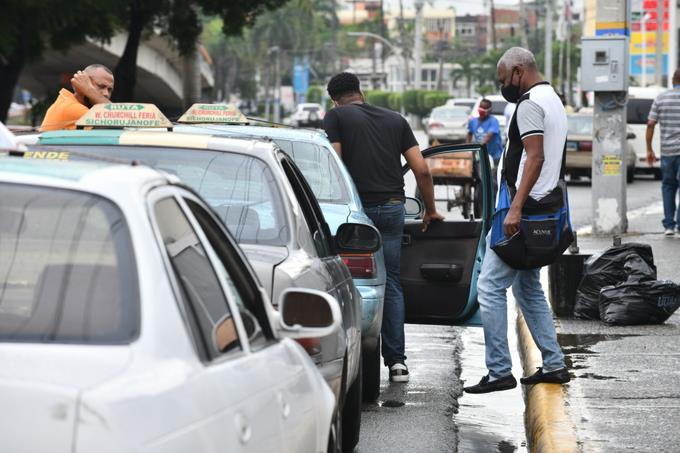 Public transport does not respect social distancing during “rush hours”

After five months of having resumed the work of public transport in the country, after the Dominican government prohibited on March 21 of this year the circulation of buses, intercity minibusses, the OMSA, the Metro and the Teleférico, the sector, which mobilizes about 2,500,000 Dominicans daily, has had to adhere to sanitary measures to protect the population.

However, passengers and drivers complain that most of these means of transport do not follow the prevention protocols, especially in the commonly known as “peak hours.”

“In rush hour, you go to the subway, and everyone is ‘packing,’ so it is everywhere. The people have already lost their fear of the Covid because the authorities do not do any repression,” mentioned Amaury Almanzar, in charge of finances for the Churchill-Feria route.

According to the Quarterly Report on the Evolution of the Demand from the Office for the Reorganization of Transportation (Opret), since March of this year, there has been a decrease in the number of users who board the Metro and the Santo Domingo Cable Car, as a result of the government’s restrictive measures to minimize the spread of the coronavirus, which force the transportation of 30% of the capacity of the trains and 40% of the cabins of the Cable Car.

According to the Opret, from July to September of this year, the total number of users transported by the Santo Domingo Subway and the Cable Car lines was 10,576,419. These figures represent a decrease compared to the 26,185,090 users who used the services for these dates in 2019.

However, despite the notable reduction in numbers, regular passengers say that around 7:00 in the morning and 6:00 in the evening, moving around the Metro is “real chaos” due to the massive flow of people who gather at the lines and stops. “There is a marked space that is supposed to be for people to get there, then they crowd in and are not respecting the marks on the floor,” said Nairobi Nuñez, a user of the Santo Domingo Metro.

Although the measure of four passengers in public cars set by the National Institute of Transit and Land Transportation (Intrant) seems to be being complied with, users warn that the risk of contagion is high since the meter distance inside the vehicles is not met.

On the other hand, bus drivers say they respect sanitary measures since the small “guaguas” carry 20 passengers, while the larger ones have 31, almost half of their capacity.

“Of 54 passengers who take the bus, we ride 30 and 31 passengers, that is the largest. The smaller ones take 19 to 18,” said Dario Montero, supervisor of the bus stop at kilometer 9 of the Duarte Highway.

On the other hand, Núñez, who rides public buses during “rush hours,” denied that the distance protocols are being followed because the drivers allow many people to get on the bus to “ride more passengers.” “Some drivers say there is space and there is not; for charging one more ticket, they put up to four or five people in the kitchen,” he said.

Marcelino Florentino, the organizer of the Feria-Churchill route, complained that after the pandemic, “more is being lost” due to the increases in gas prices and the expenses involved in providing the service.

“The driver is not doing anything. He’s just looking for the fuel and the Moor in the house. We don’t have an economy; we are living day-to-day. Unfortunately, it is like that,” Florentino added.

Pedro Gonzalez, who has been a public car driver for more than 30 years, says he has lost more than 40 percent of his income so far this year.

Jovanny Belen, a bus driver, also blames the pandemic for the drop in his earnings. “Too much money has been lost, I used to make two thousand and something now I make 800 or half,” he said.

Among the sanitary protocols announced by the Opret that would work from May 21 in the Metro and Cable Car of Santo Domingo are the mandatory use of masks, hand sanitization, and signs in the facilities that tell the population where to stand to avoid unnecessary crowding.

Also, in the Cable Car, only up to four people per cabin are allowed to board to limit exposure, and the service hours of both means were reduced to respect the curfew imposed nationwide.