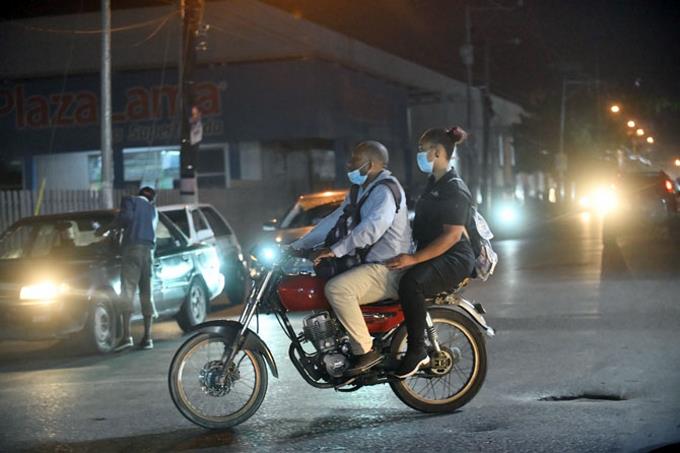 At the edge of the curfew, the motoconchos become the main transportation alternative for the population that is stranded in the busiest terminals of the Santo Domingo Metro and other points of the capital.

The traffic congestion, the reduction of the flow of other means of public transportation such as concho cars and buses, as well as the closing of the services of the Metro, the Teleférico, and the OMSA (one hour before the start of the curfew) have provided the “perfect scenario” for the motorcyclists or motoconchos that transport from any place and to any destination dozens of citizens for rates that exceed between 150 and 200 pesos the regular amount.

Alejandro Herrera, a motorcyclist on one of the routes of Sabana Perdida, explained that since the time limit for traffic on public roads is approaching, the fares increase and vary according to the destination of the user.

“After the curfew one charges depending on where the passenger is going. But the one who pays 40 pesos a day at this time has to pay 100 and 150 pesos,” explained Herrera.
Another motoconchista nicknamed “Amorol” said that in his case he has come to charge up to RD$250 for routes that normally cost 30 and 35 pesos.

“Amorol also said that “if it rains during curfew hours, the fare is even more expensive.

On his side, Edison Severino, a motorcyclist on one of the routes near the metro station Mamá Tingó, in Villa Mella, charges at least RD$100 for longer distances during the day and for the same trip but at night it costs]]] about RD$250.

However, his traveling companion, Andrés Hernández, said that like Severino he charges RD$100 during the day for passengers who “go far,” but at night, during curfew hours, it amounts to RD$300.

According to Severino the services have that cost due to the risk of being detained by the authorities while returning to their stops.

“Imagine, I take you home well. But what about from there to here? And if I get caught, how much did I pay?” Severino added while explaining that he spends a lot of money on fuel trying to avoid possible police roadblocks.

“Until there are people”
9:00 p.m. Monday through Friday and 7:00 p.m. on weekends is the limit for traffic on the public road.

Only health personnel such as doctors, nurses, bioanalysts, paramedical and pharmaceutical personnel are allowed to travel after hours.

Likewise, people with a medical emergency who need to go to a health center or pharmacy; those dedicated to private security work duly identified; members of the press and other media duly accredited.

In accordance with article 4 of decree 266-20, which establishes the curfew.

However, according to “Amorol” it is during these hours that the motoconchos “look for it” in the streets.

Alejandro Herrera, for example, assured that at night he gathers more money than he can make during the day.

“It’s better for me to work during the curfew. During the day I drive 50 or 20 passengers, but at night I ride five or seven and I make more money,” Herrera said.

Herrera said that after the curfew has started he only waits 30 or 45 minutes for some passengers and then goes home to avoid any inconvenience with the authorities.
Contrary to the latter, Hernandez and Severino said that they stay at the stop on their route and in the surroundings “until there are people.”

Severino said that during the weekends, especially on Sundays, he goes home later than the rest of the week.

User
Jonathan Trinidad, a frequent user of the motoconcho service, acknowledged that when the curfew approaches, motorcyclists increase the rate.

“Five at a time they are raising the fare,” said Trinidad, who was just waiting for a reliable motoconcho on the sidewalk of the Gregorio Urbano Gilbert metro station.
Before boarding the motoconcho waiting for him, he said that “the curfew has only benefited them” (pointing to the driver).

Arrests
In the month of October alone, about 23,440 citizens were arrested for violating the curfew, according to the regular reports offered by the National Police through its digital platforms.

A total of 9,679 were arrested in the municipalities of greater Santo Domingo.

On average, during the weekends 2,785 people are detained; 1,100 of them in the capital alone.

Curfew
The current curfew ratified by President Luis Abinader will expire November 11, as established in Decree 554-20.