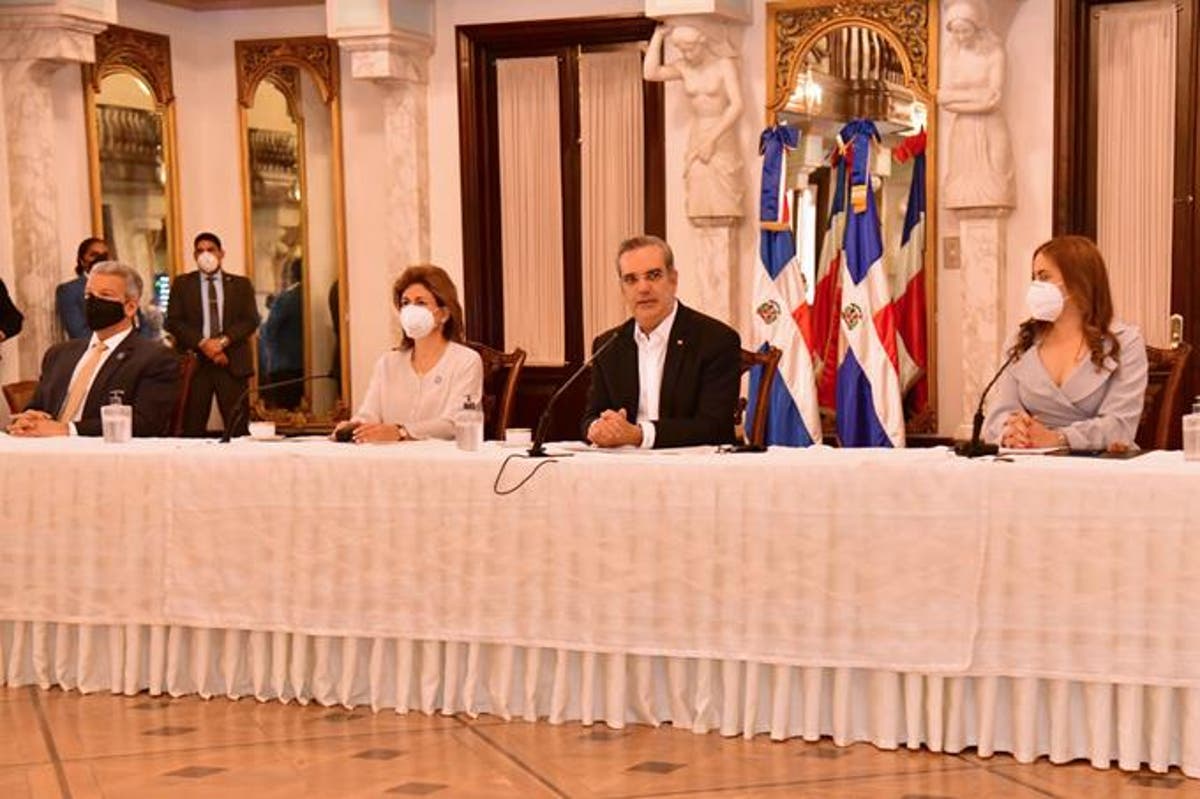 President Luis Abinader reported yesterday that the government’s top priority is to get the Covid-19 coronavirus vaccine as soon as possible and hopes to announce results at any time to see if they receive urgent doses.

The president is waiting for a batch of about 200,000 vaccines to start vaccinating the personnel with the highest risks, such as those in the health sector and then the elderly.

He indicated that the Government already has a purchase agreement with the pharmaceutical company AstraZeneca (for ten million doses), “and it is the most practical. We can store it at a reasonable temperature,” he added.

He said that Vice President Raquel Peña has been in contact with Pfizer, Moderna, with the Russian vaccine Sputnik and Covax, a coordination program of the World Health Organization (WHO), for the equitable distribution of the vaccine.

One last effort
President Abinader asked citizens to make a final effort after the new confinement because there is a light at the end of the tunnel, referring to vaccines.

He expressed that the quarantine has not been easy for anyone and has affected all citizens and sectors.

“We know that it is not easy, the Armed Forces and the Police are tired after ten months, and we know that the population is tired,” he said.

He emphasized that the situation due to the coronavirus and the curfews have influenced everyone. Still, there is a critical mission on the government’s part to bring health to all Dominicans.

“We must admit that at Christmas not only in the Dominican Republic but also around the world, this greater contagion is present in all countries, there is more contact, people gather for both the 24th and 31st because of the Christmas season,” said the head of state during a press conference at the National Palace.

“Let’s make another effort. I know that they have done it, and I know that there are many sectors affected, I know, and it hurts, and we all suffer it, but let’s make a last effort because there is a light at the end of the tunnel that are the different vaccines that are coming out,” he said.

Management
On his side, Peña, who coordinates the government’s Health Cabinet, said that the Dominican Republic has already signed a purchase and sale contract for the different vaccines that have been approved, as well as those that are yet to be approved.

He cited the signature of AstraZeneca, Pfizer. They also signed with the WHO program that there embrace all the vaccines that are approved or in the process to immediately the distribution begins. As they establish their logistics, the Dominican Republic begins to receive them.

He stated that they are having a series of approaches to receive several emergency doses ahead of schedule.

Target
No rest.
“We are not going to rest until we receive those first doses and can start this whole vaccination plan, especially the vulnerable population, especially health personnel,” added the Vice President of the Republic.

They accept the proposal.
LISTÍN DIARIO, in its editorial of last December 26, advocated for the government to manage the dispatch of emergency vaccines against Covid-19 for medical personnel before the first batches of AstraZeneca arrive, a pharmaceutical with which the country signed a purchase and sale contract to acquire 10 million doses.

Priority.
Most countries that have initiated vaccination campaigns give priority to health personnel and vulnerable sectors.

Viruses come with climate change.
An increase in cases of patients with flu and respiratory ailments caused by viruses that frequently circulate at this time of year in the country are beginning to receive health services from both the public and private sectors, many of whom come to the doctor suspecting the COVID-19 virus, due to the similarity of many of its symptoms.

Some doctors and health centers have begun to see a rebound in cases of influenza and respiratory viral processes typical of the season that are caused by changes in temperature, but that could lead to confusion in the initial diagnosis of COVID because They present with fever, general malaise, nasal congestion, headache, and sore throat. However, they do not cause loss of taste and smell as occurs in some of those infected with the coronavirus.

Doctors Rafael Mena, president of the National Association of Private Clinics and Hospitals (Andeclip), and Clemente Terrero, infectious disease specialist and director of the Robert Reid Cabral Children’s Hospital, referred to the subject and urged the population to maintain preventive measures and to go to the doctor so that he can follow up and manage it promptly.

The president of Andeclip said that although currently the general population is focused on the COVID, it is a reality that we are feeling an upsurge of those viral conditions that always occur at this time of year. “So the population and doctors should think about that too,” he added.

He noted that the important thing is that people maintain the care that is always recommended to wash hands, avoid crowding, prevent the fever from rising, plenty of fluids, avoid exposure to rain and cold wind, monitor the symptoms to avoid complications, especially in children under 18 months of age.

Likewise, Mena favors that in the country, all vaccines that are approved for emergency use to prevent COVID and that are being applied in other nations are brought and applied.

In turn, the infectologist Terrero said that many cases of patients with respiratory conditions that are not COVID are being received, typical of climate changes and the trips people have been making.

He said that there is always the possibility of confusing respiratory viral conditions with the COVID virus because the symptoms are similar, except when the patient has loss of smell and taste, which are more specific characteristics of the COVID disease.

The specialist recommends that when the doctor receives a respiratory condition patient, they think of both COVID and HINI Influenza, which requires two tests to differentiate. Still, if a patient with many signs of COVID, the virus should first be ruled out.