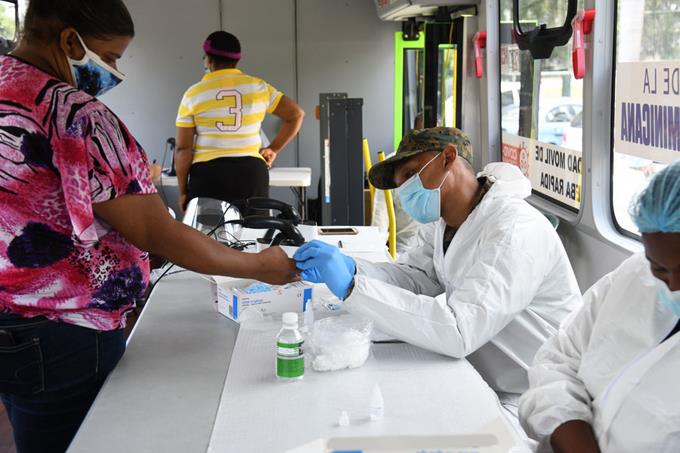 In the provinces with more cases of contagion, the greatest restrictions must be made.

THE CORONAVIRUS ON THE BOOM

In the provinces with more cases of contagion, the greatest restrictions must be made.

The health authorities agreed yesterday with the Listín Diario proposal that strategies be put in place to focus on the restrictive measures of mobility and the tracking of cases in the areas identified as having the highest incidence of Covid-19 contagion.

Dr. Eddy Pérez Then, advisor to the Ministry of Health on COVID-19 matters, and the vice-minister of Collective Health, Dr. Ivelisse Acosta, consider this suggestion very valid and correct, which, they affirm, has been considered and is part of the strategies that the country has adopted in some cases and contemplates being able to reinstitute again at a specific moment.

In yesterday’s editorial, the Listin Diario newspaper emphasized that there are provinces consistently identified as hot spots or foci of transmission of the virus and suggested applying a more rigorous curfew model in these areas and relaxing the quarantines in the rest of the country, without lowering the guard in general, together with massive operations of diagnostic tests to detect, trace and confine the infected persons.

Dr. Acosta said that this approach from the epidemiological point of view is very valid. Even in the same province, there could be areas with more significant restrictions than others, “this has been contemplated, and I believe that the possibility is being evaluated.”

Likewise, Dr. Perez Then said that it is a very advisable strategy. With the restriction of mobility, a culture of contact tracing must be created, a “One A” priority at present for the Dominican Government.

Likewise, Vice Minister Acosta reminded the population that the fact that since yesterday a less restrictive curfew schedule began and a greater openness had been given does not mean a license to forget about the recommendations and lower the guard and that on the contrary, it should be assumed with maturity and responsibility.

He reminded me that whether to continue giving openness seeking a balance between health and economy or to have to go back to taking more restrictive measures, will depend on the behavior of the population and the virus.

“It is not a license for us to think that we do not have an active problem. A COVID-19 that is impacting us, we have to look at it both ways, as an effort that is being made to try to balance a little bit of health with the economy,” Acosta said.

Regarding the possibility of the circulation of new strains in the country, he informed that a national sampling had been sent to the CDC in Atlanta to be studied and determine any new strains circulating.

He also informed that the National Laboratory is installing equipment or a sequencer to determine and monitor the circulating strains of Covid and other viruses.

Dr. Perez Then reminded that when people with symptoms are tested, this increases the daily positivity rate, but that the four-week rate gives the trend in the behavior of the virus and that this has been seen to be decreasing slightly.

Regarding the transmissibility rate, he said that it has been decreasing in the country because on the 9th of this month, it was at 3.26, which means that each infected patient could transmit the virus to another patient. Still, on the 16th, it was at 2.06, and on the 23rd, it was at 1.97, which shows that the restrictive measures are giving results.