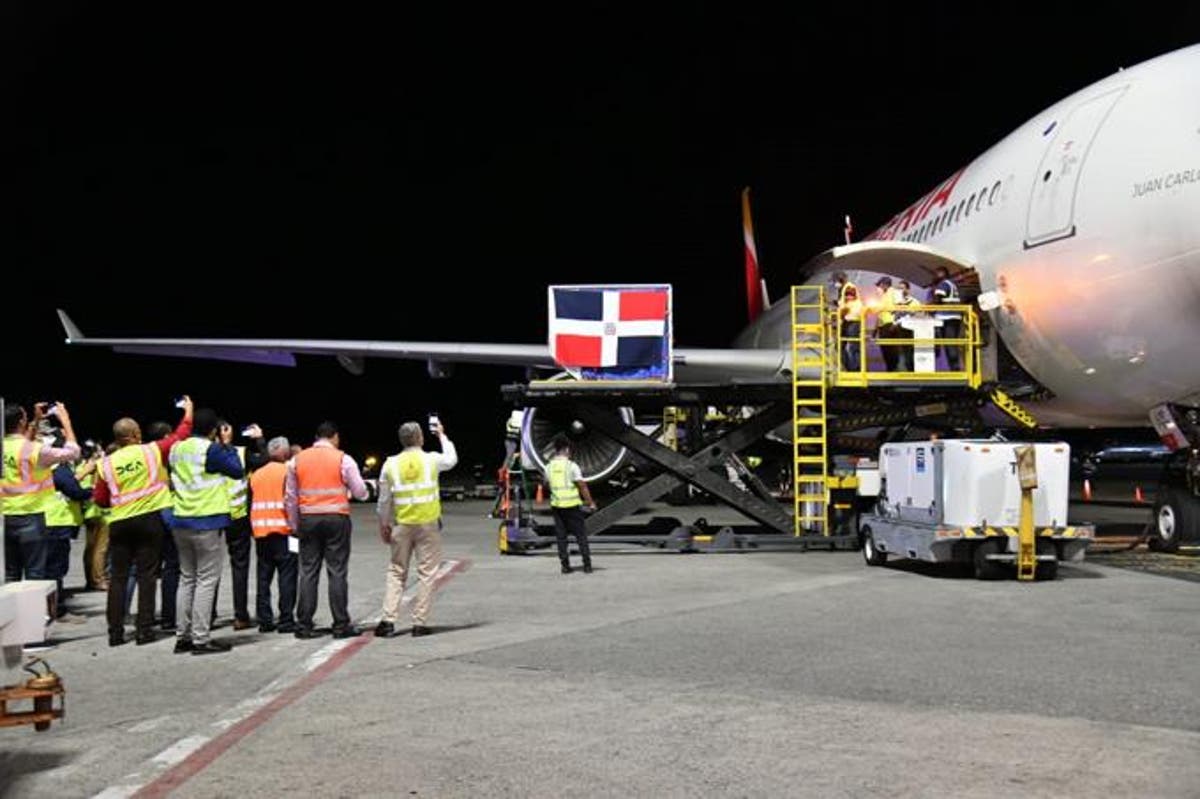 The 30,000 doses of coronavirus vaccines donated by India to the Dominican Republic arrived last night on a flight from Madrid, Spain. They were received by the director of the National Health Service (SNS), Dr. Mario Lama.

The official thanked India’s people for donating vaccines against the coronavirus, which he said are in addition to those that the government has already purchased to immunize all Dominicans against the disease.

The official spoke with journalists at Las Americas International Airport after receiving the second batch of the vaccine.

“It is a donation in addition to all the other purchases that have been made,” Lama said.

The Deputy Minister of Health Collective, Ivelisse Acosta, also spoke about the matter, who said that the doses would allow the Expanded Immunization Program (PAI) to be extended against Covid-19 began last Tuesday.

The coronavirus vaccination process continued yesterday in the three regions of the country, with reports of immunizations in Puerto Plata, in the North, Barahona, Neiba, and Ocoa in the South, and El Seibo, in the East.

In Puerto Plata, the provincial director of Health, Dr. Johnny Tavárez Capellán received yesterday the first dose of the AstraZeneca vaccine against Covid-19 at the Bournigal Medical Center (CMB) of the Rescue Group, where he has worked for 30 years. Tavárez, a renowned Puerto Plata pulmonologist, said that President Luis Abinader and the Minister of Public Health, Dr. Plutarco Arias, since the first vaccines arrived in the country, have made an effort to ensure that the first-line medical personnel who work with patients with Covid-19, get the doses.

“We are in the first phase, phase 1A and in the following days the medical personnel will be completed and the elderly with some morbidities will also be vaccinated. The Government’s idea is to vaccinate more than seven million people in this year that this vaccination day begins,” indicated the provincial director of Health of Puerto Plata.

In Barahona, it was the responsibility of the pulmonologist Ángel Féliz, responsible for the unit that cares for people affected by coronavirus and who from the beginning was put in charge of the Regional Hospital that is on the front line of combat against the pandemic in the Enriquillo Region, to receive the vaccine against Covid-19 in this province.

The dose was administered by Dr. Thelma Batista, director of the Provincial Health of Barahona (DPSB), after a formal act was carried out in the old hospital of the Dominican Institute of Social Security (IDSS).

The Ministry of Public Health sent 40 doses of vaccines to Barahona that were administered to the medical and nursing personnel at the forefront of the first line of combat against the disease in the region. In this province, 10,345 tests have been carried out, of which 2,570 people tested positive for coronavirus, with three new ones in yesterday’s bulletin, for a cumulative incidence of 1,358.52, a positivity of 12.55%; 1,782 recovered and 27 deaths due to Covid-19.

For Dr. Wilkins Manuel Féliz Santana, president of the Barahona / Pedernales Interprovincial of the Dominican Medical College (CMD), it is an essential step for this province the entire country.

However, Féliz Santana, approached by Listín Diario at the end of the protocol act where the vaccination of the medical staff here was started, said that the bottles containing the 40 doses for the same number of people are not enough to immunize a vital part one of those on the front line.

In Neiba, the provincial director of Health was the first to be vaccinated at the beginning of the vaccination process yesterday in Baoruco.

At least 32 people will be vaccinated on the front line, informed Dr. Juan Bolívar Cuevas Davis, director of the San Bartolomé hospital, at the end of a brief act held in that healthcare center.

The start of the first day of vaccination against Covid-19 fell short in El Seibo. It was insufficient in the Doctor Teófilo Hernández hospital, where only eleven people were applied, part of the center’s medical staff, nurses, and administrative staff.

The vaccination, which aroused the excitement of all the personnel who were previously summoned by hospital executives, led by its director, Dr. Vancety Padilla, with Senator Santiago Zorrilla and Governor Irene Martínez, surprisingly only administered a small number of vaccines.

The vaccine was only applied to four doctors, four nurses, and three janitors; when in the health center the number of nurses exceeds 125, the doctors are 54, and the administrative staff exceeds 30 employees.

In San José de Ocoa, the vaccination campaign started, and it was Dr. Johansen Manuel Sánchez, the first to receive the dose of the vaccine against Covid-19.

The day began at the Ocoa Diagnostic Center, where a ceremony was held led by Governor Oliva Castillo Aguasvivas, Health Directors, Romil Vásquez, from Hospital San José; Neftali Castillo, Senator José Antonio Castillo, the person in charge of the vaccination program of the provincial health department, Odalix Castillo, Dr. Elerio Luciano, director of the Primary Care Units (UNAP), among others.