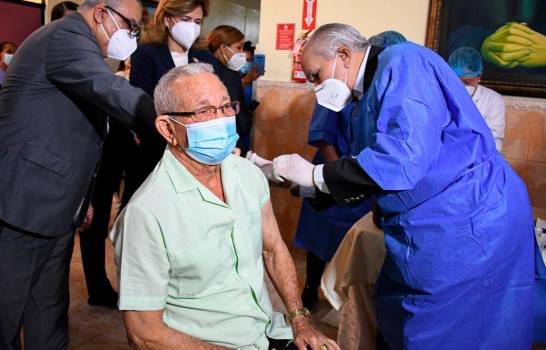 In the San Francisco de Asís Home for the Elderly, which houses more than 200 older adults, the vaccination of the elderly in the country began.

This Thursday, the Ministry of Public Health, the Vice Presidency of the Republic, and the National Council of the Aged Person (Conape) began the vaccination process against COVID-19 of adults over 60 years of age with comorbidity prioritizing those who are in nursing homes.

In parallel with the beginning of the vaccination of teachers, the country advances to the IC stage of the first phase of the Vaccination Plan.

The first nursing home to receive the vaccine doses was the San Francisco de Asís Nursing Home, which houses more than 200 older adults.

The conference was led by the Vice President of the Republic, Raquel Peña, the Minister of Public Health, Plutarco Arias, and the Executive Director of Conape, José García Ramírez.

“The Vice President of the Republic today began the vaccination process for the country’s elderly. For this, the San Francisco de Asís Asylum was chosen, which is a very old and successful organization … we started here, but this will happen in all the asylums where elderly inmates are,” explained García Ramírez.

Seniors around 45 to 50 nursing homes will be inoculated on an uninterrupted basis—these homes group almost five thousand older adults nationwide.

Under the responsibility of Conape, there are three thousand older adults in nursing homes.

“Now we are also going to vaccinate Conape day homes,” said the doctor.

García Ramírez was one of the first vaccinated, because in addition to being the director of Conape, due to his age, the first phase corresponds to him.

“So far, we have not had significant reactions. I received my vaccine a while ago as an old man, as a doctor, and I did not even realize it,” said the doctor.

García Ramírez affirmed that all the country’s provinces have their doses of vaccine for these elderly.