Public Health: Five variants of COVID-19 circulating in the DR 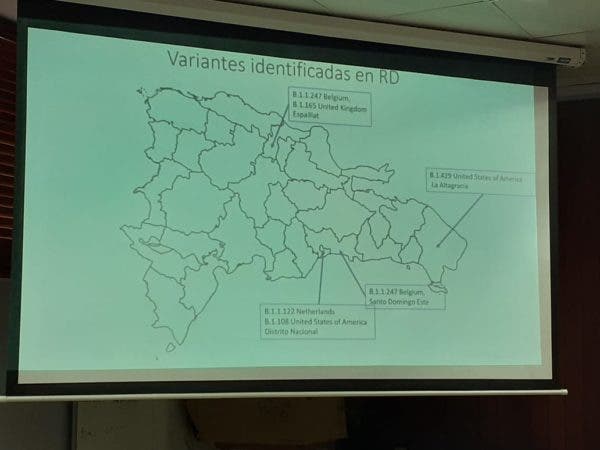 The Ministry of Public Health identified the incidence of five variants of the coronavirus in the Dominican Republic thanks to the random study of PCR samples in various locations in the country.

According to the map of the variants identified in the country, presented today by the health authorities, two mutations of the virus were identified in the National District: B.1.1.122 originating in the Netherlands and B.1.108 from the United States.

In Santo Domingo East, B.1.1.247, originating in Belgium, was located.

Another variant from the United States, B.1.429, was located in the province of La Altagracia.

Transmissibility. The special advisor of the Ministry of Public Health for the COVID-19 response, Eddy Perez-Then, informed that the variations of the virus registered do not represent high transmissibility. However, he cannot explain scientifically why. He specified that despite the appearance of these variants, the contagions by coronavirus have decreased in the country.

When did it appear?

The variants that appeared in the country were identified in the world for the first time between February and June last year.

According to Perez-Then, these variants must have been related to the second wave of infection that started between November and December last year.

The health authorities indicated that with the identification of the variants, it is not possible to calculate their incidence in the country since the sentinel surveillance method only allows them to know if variants are circulating.

They reiterated that these variations of the virus do not represent an increased danger of lethality for the nation and do not suggest a modification in the protocol for the return to teaching.