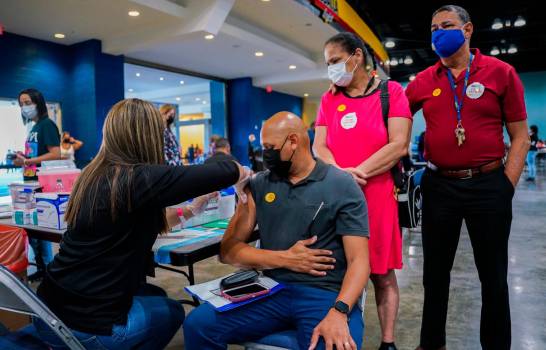 Photo provided by La Fortaleza, headquarters of the Puerto Rico executive, of a man receiving his COVID-19 vaccine on March 31, 2021, during a mass vaccination event at the Convention Center in San Juan (Puerto Rico). (EFE)

The Puerto Rico Department of Health reported Tuesday that it had identified two cases of a new covid-19 variant on the island, a California-type mutation, B.1.427, classified individually despite its similarity to others.

We cannot control the mutations, but we can maintain the prevention protocols to the letter. The key is to wear a mask and ensure physical distancing and hand washing to avoid contagion,’ said the Puerto Rico Department of Health (DS) secretary, Carlos Mellado.

According to Mellado, the DS collaborates with the Centers for Disease Control and Prevention in San Juan (CDC). This laboratory is sequencing the samples together with the Ponce Health Sciences University (PHSU).

The cases also receive the help of several laboratories on the island that collect samples and send them to the CDC in Atlanta.

Of the 28 cases, 26 are considered a variant of concern since the evidence indicates that they have greater transmissibility. In contrast, the variant of interest has specific genetic markers to which changes have been associated that allow the transmissibility of the virus; the DS indicates in the communiqué.

At the moment, the two cases of the Brazilian variant correspond to variants of interest.

“At the moment, we only have identified one person between 60 and 69 years of age. About eight cases in people between 50-59 years, seven patients between 40 to 49 years, four cases of people between 30 to 39 years, Also, seven people have been identified to be between the ages of 20 to 29 years and finally a young man between the ages of 16 to 19 years,” the report concluded.

In its report today, the Puerto Rico Department of Health informed that since the beginning of the pandemic, 2,136 people have died, and 99,780 confirmed positive cases.

Hospitalizations of adults total 269, and there are 37 older adults connected to a respirator because of covid-19.