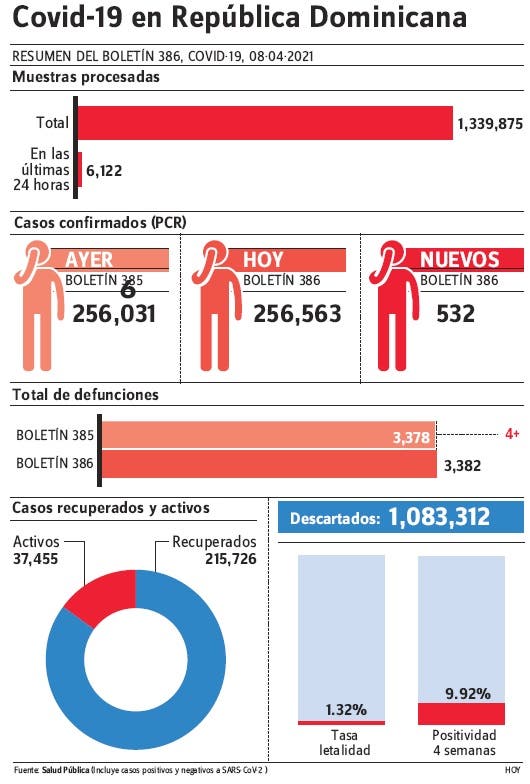 During the last hours, more admissions to intensive care and ventilators have been recorded.

SANTO DOMINGO.- In its bulletin, this Saturday, the Ministry of Public Health reported that in the country there are 623 new cases of coronavirus and three deaths reported in the last 24 hours.

According to bulletin 387, 128,573 samples were processed in all laboratories in the country, which places the daily positivity at 17.71%.

The Ministry of Public Health reported the processing of 6,122 tests (antigenic and PCR) performed during the same period. The data are contained in bulletin number 386 issued by the General Directorate of Epidemiology, an Ministry of Health agency.

Deaths. The official report states that deaths so far total 3,382, of which four were reported in the last few hours, one of which occurred in the previous 24 hours. The case fatality rate remains at 1.32%.
Of the total deaths, 29.69% were hypertensive and 18.60% diabetic.

Positivity. Daily positivity is registered at 14.72%, while in the last four weeks, it is 9.92%. According to the data provided by the General Directorate of Epidemiology, the total number of samples taken in the country has already reached 1,339,875.

Samples. The Dominican Republic has discarded 1,083,312 samples and reports that of those processed yesterday, 6,051 were PCR samples, and 71 were antigenic tests.

Likewise, 3,614 were applied to patients for the first time, and 2,508 were subsequent or follow-up results.

Beds. Regarding the availability of beds for covid-19 care in the country, Public Health reports a slight increase in their occupancy rates.

As of yesterday, 20% of the covid-19 beds, in general, were occupied, which implies 486 of the 2,445 beds available for this purpose. Regarding intensive care unit beds, yesterday’s report was 32% or 155 of the 486.
According to official information, the use of ventilators stands at 25%, which means 97 out of 387 are occupied.

Risk groups. As for the risk groups, the number of infected persons under 20 years of age reaches 27,853, and of the health workers, 748 have contracted covid-19, and 360 pregnant women have also been affected.

The latter province registered one death in the last 24 hours. Other regions with the highest number of accumulated deaths are Puerto Plata, Las Romana, La Vega, San Cristóbal.

The measures. Given the covid-19 pandemic, the state of emergency was reissued, and the call for the population to respect the sanitary decisions issued is maintained. The use of masks is mandatory when sharing in public spaces, as well as hand washing.

Recommendations
The Ministry of Health urges Dominicans to maintain physical distance and wash their hands frequently with plenty of soap and water.

Vaccination
The Ministry asks the population to go to vaccination posts to get immunized and avoid complications due to covid-19.