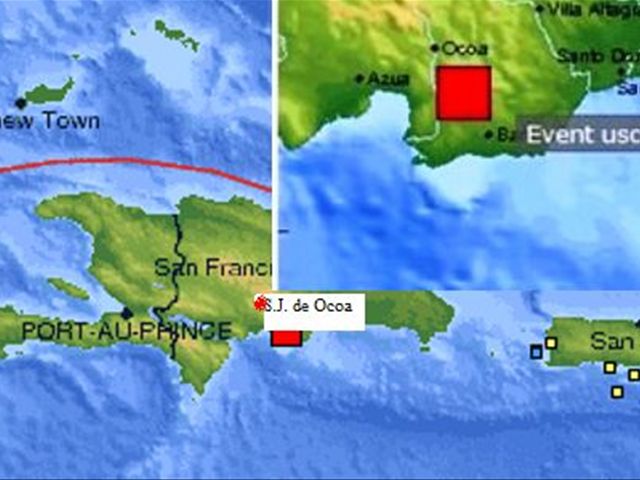 Santo Domingo.- A moderate tremor of 5.3 magnitude has rattled the entire Dominican Republic, at around 5:32am local time, whose epicenter was located 17 kilometers south-southeast of the city of San Jose de Ocoa, at a depth of 10 kilometers.

The tremor shook doors and windows for around 30 seconds, startling people to scurry out of bed.

Emergency Operations Center director Juan M. Mendez said there are no reports of damages or injuries thus far, although cracks in structures have been reported in the country’s south region.

Jose Mateo, on the phone from the town of Fundacion, in the southern city of Bani, said his house under construction “has some cracks,” with no major damages.

The geologist Osiris de Leon said since the tremor’s epicenter was inland, no tsunami warnings were issued. Interviewed by the program El Dia on Channel 11, the expert said the tremor was also felt in Haiti, where a 7.5 magnitude earthquake devastated the capital, Port-au-Prince on January 12, 2010.

Eugenio Polanco, director of the Santo Domingo State University UASD Institute of Seismology stressed that there’s no possibility of a tsunami, as the social media report.

He said two faults converge in the area of the quake, and noted similar tremors in 1980 and 1990. “There have been several tiny replicas from the tremor, but this is a normal result.”

THE REPORT FROM THE US GEODETIC SURVEY: