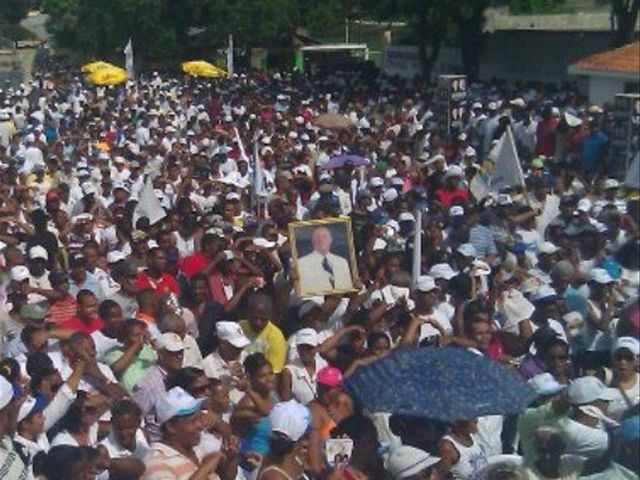 Barahona, Dominican Republic.- Opposition PRD presidential candidate Hipólito Mejía affirmed Sunday that the entity’s masses will roll over the organization’s president Miguel Vargas, for his attitude assumed with his candidacy.

The ex chief executive (2000 – 2004) said when as leader a politician doesnot update themselves they’ll go thorough what occurred to other important PRD historical figures, including it founder Juan Bosch, whom in his view the masses “walked” over.

“Juan Bosch, the leader Juan Bosch, left in 1973, and so what?, Antonio Guzmán came in 1974 and they stole the elections from us, then (Jacobo) Majluta and we became babblers and (Joaquin) Balaguer sneaked in again, Salvador Jorge Blanco, later came Peña, the leader died, and now it’s this farmer from Gurabo,” Mejia told local journalists, prior to a working-breakfast in a private residence.

“That’s his problem if he doesn’t join the work for his party’s candidacy, or do you know some leader in Barahona that isn’t integrated to the PRD campaign,” he said.

Mejia however said he’s open like a “canoe” for whatever. “But I don’t want to speak of that any longer, for what? A commission was created for the effort necessary in the search of an understanding,” he said, and affirmed that he has yet to understand Vargas’ behavior.

Vargas reportedly flew to San José, Costa Rica yesterday, to participate today and tomorrow in the meeting of the International Socialist Council.