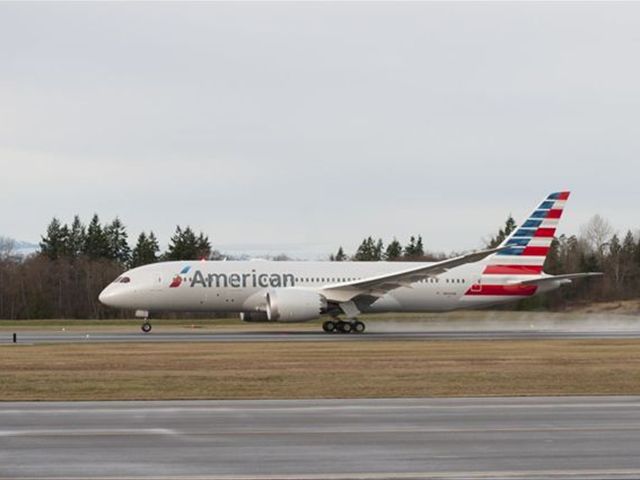 Fort Worth/Arlington, Texas.- American Airlines today officially welcomes its first Boeing 787 Dreamliner. American took delivery of the airplane, a 787-8 with registration number N800AN, on Thursday at Boeing’s factory in Everett, Washington, and it is scheduled to arrive inDallas/Fort Worth on Friday afternoon.

"We are committed to delivering a fantastic product for our customers with the continuation of our unprecedented fleet renewal program and more than $2 billion in improvements in the customer experience," said Doug Parker, American’s chairman and CEO. "The 787 makes our fleet younger and more modern and it will open up new possibilities to connect our customers to the places they want to fly."

"We’re proud that American Airlines has chosen the 787 to be a key part of its fleet renewal plan," said Ray Conner, president and CEO of Boeing Commercial Airplanes. "We appreciate American’s confidence in the airplane and know the Dreamliner will open exciting new routes for American’s customers."

American has placed firm orders for 42 Boeing 787 aircraft, with the right to acquire an additional 58. American will take delivery of both the 787-8 and 787-9 as part of the 42 firm orders. American expects its first 787 to enter revenue service in the second quarter, flying domestically between American’s hubs for several weeks before being launched on international flights.

The 787 will bring new benefits to American’s network and customers. It has an onboard experience unlike any other airplane and provides improved aerodynamics, advanced engine technology, reduced maintenance requirements, better fuel efficiency and lower overall operating costs.

American already has the youngest fleet of the U.S. global network carriers, with an average aircraft age of 12.3 years. In 2015, American plans to take delivery of an average of two new aircraft per week. These new deliveries will make American’s fleet even younger, more modern and more efficient and will provide a solid foundation for continued improvements in technology, products and services.

American is in the midst of more than $2 billion in planned improvements to give customers a superior travel experience around the world. These investments include fully lie-flat seats on international long-haul aircraft; international Wi-Fi; more in-flight entertainment options and power outlets; a new, modern design for Admirals Club lounges worldwide; and an upgraded assortment of complimentary healthy food, cocktails and more. In addition to taking delivery of hundreds of new planes, American is retrofitting its entire fleet of Boeing 777-200s and selected 767-300s, 757-200s and Airbus A319s to refresh the cabins and enhance the experience on domestic and international flights.