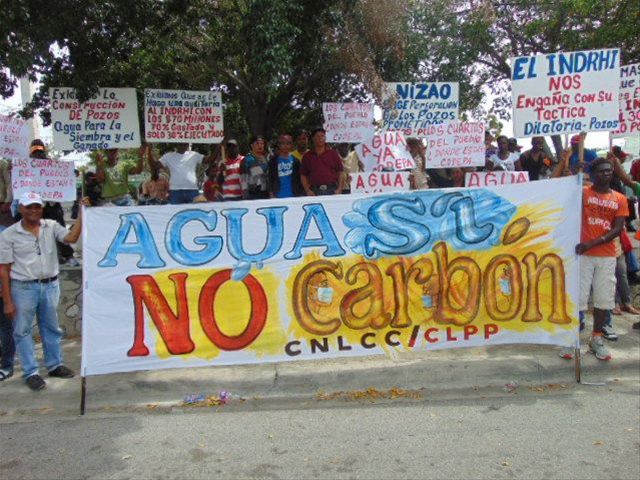 Bani, Dominican Republic.- Dozens of Peravia province communityleaders and agro organizations picketed and chanted slogans in Paya township (south)during more than two hours Thursday morning, demanding access to piped water, publicworks and services, and against the coal-fired plants at Punta Catalina, whichthey warn could turn their region into the “valley of death."

Speaking at the rally Peravia business and communityleaders Juan Bayona, Wilton Perez and Hector Turbi, among others, said theircommunity has grown tired with the provincial officials’ repeated failure to fulfillpromises.

They said despite the government’s RD$70 million disbursementto rebuild the Valdesia-Nizao irrigation canals within 30 days, the work is only30% complete “when they’ve already spent 70% of that money in just five months.”

They said despite Peravia senator Wilton Guerrero’s announcementon April 15 that US$27 million was allocated to build an aqueduct and concludeit by February 2016, nothing has been done.

The organizations also note that despite opposition to thecoal-fired plants at Punta Catalina expressed by the people of Bani and adjacenttowns, the work continues, "even if it turns Peravia into the valley ofdeath."

They accuse the government of failing to fulfill thepromise to build the beltway, the construction of the university campus and thelevy at the Bani river, and of letting farmers go bankrupt by the drought and debts.