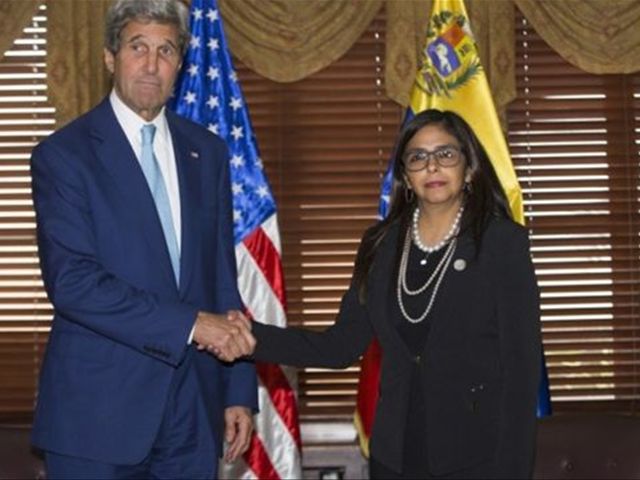 Santo Domingo.- The Washington-Caracas collision marked thestart of the Organization of American States’ (OAS) 46th annual meetingsbeing held in the Dominican Republic since Monday, but the clash then gave wayto a surprising rapprochement just hours later.

Despite that Venezuela’s crisis didn’t figure on the OAS’ agenda,in spurred a behind-closed-door meeting between US Secretary of State, JohnKerry, and Venezuela Foreign Minister Delcy Rodriguez.

The two top diplomates agreed to “open a channel ofdialogue” to find solutions to Venezuela’s political and economic crisis, Kerrysaid quoted by Reuters.

Kerry said deputy Secretary of State Tom Shannon, willtravel to Venezuela "as soon as possible," to launch the bilateraldialogue that could include US aid to deal with the shortages of food andmedicine in the South American nation.

Kerry asked Caracas to "pay homage" to its own Constitutionalprovisions by holding a timely referendum that would depose Maduro from office.He also requested the release of political prisoners and respect for freedom ofexpression.

But Rodriquez immediately rebutted by accusing Washington ofdouble standards regarding humanitarian crises, when it (the US) “has beenresponsible for the current crisis gripping Middle East and North Africa.”

She also scoffed at Kerry’s claim that Caracas has"prisoners of conscience" while the US still keeps Puerto Ricanindependence leader Oscar López Rivera and Native American leaders behind bars.