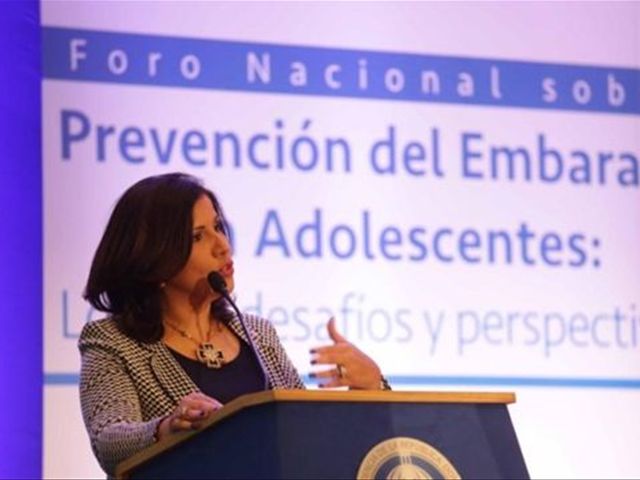 The vice president was speaking at the Tuesday launch of the National Forum for the Prevention of Teenage Pregnancies: Achievements, Challenges and Prospects, which will analyze the strategies for implementing a new national prevention plan for 2017-2020, as well as reviewing the progress that has been made in this area.
As well as a public health problem, the high teenage pregnancy rate represents a challenge for the government, for civil society, and for private companies, meaning that that it has an impact on us all, said the VP. The situation affects 20,000 girls under the age of 18 in the world every day, according to a report by the United Nations Population Fund.

In order to address the issue, a series of programs for educating children, boys as well as girls, have been implemented in the Dominican Republic. The VP described the high teenage pregnancy rate as an engine for reproducing poverty, which has become one of the problems that undermines the country’s development.
Cedeño de Fernández said that the high rate of underage pregnancies exposed the social inequality experienced by many young Dominican women who are forced to leave school and give up their plans, their goals and their lives.
Teenage pregnancies affect all of society, the economy, and especially harms future generations, she reiterated.
The main causes are poverty, lack of sexual education and efficient primary health care, sexual violence, the need for more sexual and reproductive health services, and a lack of psychological and emotional information at home and at school, according to the VP.

One program, “Bebé Piénsalo Bien” (Baby, think it through) has reached more than 30,000 students at state and private schools; they are given a simulator doll to give them a sense of the real experience of looking after a baby.
The "Yo Decido Esperar" (I’ve decided to wait) program is aimed at raising young people’s awareness of the psychological, social, biological and economic consequences of early pregnancy. The VP said that more than 5,000 teenagers had already attended training sessions as part of this program.