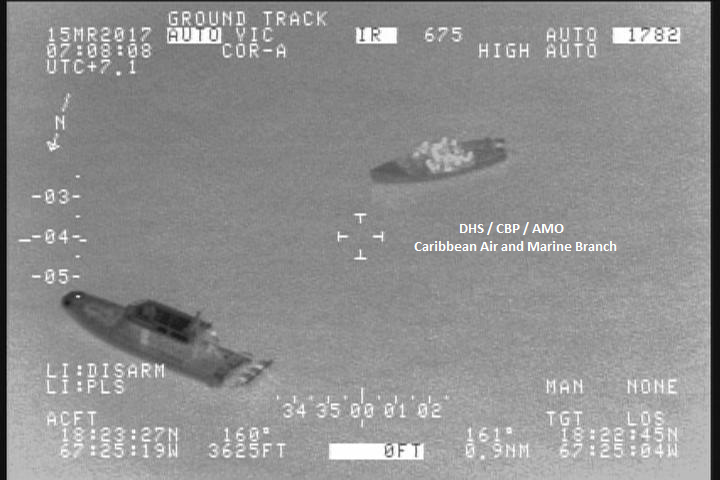 Near 2:00 AM, a CBP DHC-8 Maritime Patrol Aircraft (MPA) crew detected a small 25-foot wooden “yola” vessel with one outboard engine, with more than 20 persons on board, heading eastbound towards Rincon, Puerto Rico.

“Air and Marine Agents are diligent to coordinate with partners any smuggling attempts through our coastal areas,” stated Johnny Morales, Director of Air Operations at the CBP Caribbean Air and Marine Branch.

The CBP MPA maintained surveillance coordinating with a PPRD Joint Forces for Rapid Action (FURA<https://en.wikipedia.org/wiki/Puerto_Rico_Joint_Forces_of_Rapid_Action>, for its Spanish acronym) marine unit, intercepting the vessel 8 miles off the coast.  Thirty migrants, 31 men and 3 women (33 from Dominican Republic and 1 Haitian), were transferred on board of the US Coast Guard cutter Vigilant for initial processing.

The four defendants were transported to the Mayaguez port where Border Patrol agents will assume custody for prosecution.  US Coast Guard repatriated the remaining migrants.

“We will apply consequence in such cases when a migrant attempts to reenter illegally after a prior deportation,” stated Ramiro Cerrillo, Chief Patrol Agent at the Ramey Border Patrol Sector<https://www.cbp.gov/border-security/along-us-borders/border-patrol-sectors/ramey-sector-aguadilla-puerto-rico>. “Nonetheless, it is our duty to reiterate our cautionary message to all migrants who attempt to make such a dangerous voyage.”

If convicted, the defendants face a fine or between 10 to 20 years of incarceration, or both.

All defendants are presumed innocent until found guilty by a court of law.