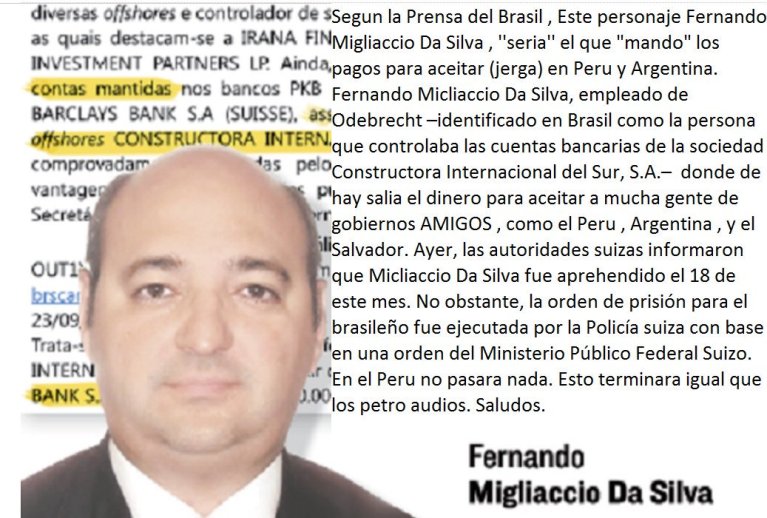 Santo Domingo.- Fernando Migliaccio da Silva, executive of the Brazilian company Odebrecht, in charge of managing money from the “structured operations” (tips or bribes), confessed in an interrogation to Brazilian authorities that the multinational contractor did fund an election campaign in the Dominican Republic.

Brazilian daily Estadao published documents of the interrogation Fernando Migliaccio da Silva, who said: “I knew exactly what we were paying for the elections; we paid for their work in the elections-, their work, very well done, to be sure – in the elections in El Salvador, Venezuela, Angola, Brazil, Dominican Republic and Panama.”

Migliaccio, who confessed to being responsible for delivering money from Odebrecht’s “structured operations” department, also known as “bribe department” (bribes), confirmed that he paid for campaigns in several countries, including the Dominican Republic.

When Brazil Elections Inspector general Herman Benjamin asked him to specify the amounts of illegal campaign funding since 2014, Migliaccio said “between 650 and 700 million dollars.”

Administrative minister José Ramón Peralta, one of president Danilo Medina’s closest collaborators, denied Wed. having received funds to pay the services of Brazilian publicist Joao Santana in the electoral campaigns of 2012 and 2016 .

“We remain firm in the truth: Dominican Republic did not receive funds to finance services of Joao Santana. This is absolute and can be verified soon. The truth only responds to the facts, not to interpretations or rumors,” Peralta said.

The official responded to information by Brazil media which reveal, citing sources, that Santana and his wife Monica Moura detailed the illegal money in the election campaigns iin Brazil and other Latin American countries since 2006 until their arrest last year.