Dominican Republic authorities ‘fear’ the rise of the people 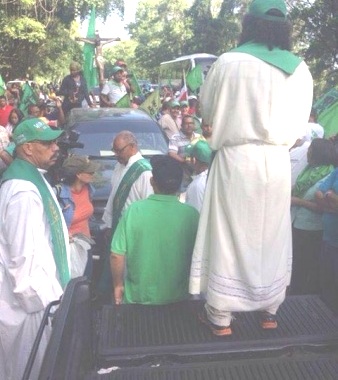 R. Cruz in a protest

Santo Domingo.- Outspoken priest Rogelio Cruz said on Friday said there are all kinds of people in the Green March Movement against Impunity, but what’s important is “to purify it, because the one who doesn’t fit within the movement’s purity, won’t find space.”

The priest responded to the allegation that alleged criminals and people deported from the United States for drug trafficking had been involved in the demonstrations.

In a visit to National Police deputy director Alejandro Dipré, Cruz said that the authorities’ vigilance of the movement’s participants reveals “fear because the people are rising.”

“Even one’s fingers are not the same. In processes, when they start, everybody walks, but the important thing is to purify it because everyone who doesn’t fit within the purity of that movement, will not find space within the movement,” the prelate said.

He said the participation of those people in the march cannot “denaturalize” the movement. “The situation is this, what the country is living through is going to come with or without us. It’s preferable to be involved in that process and not want to get in later, because we would be rejected.”