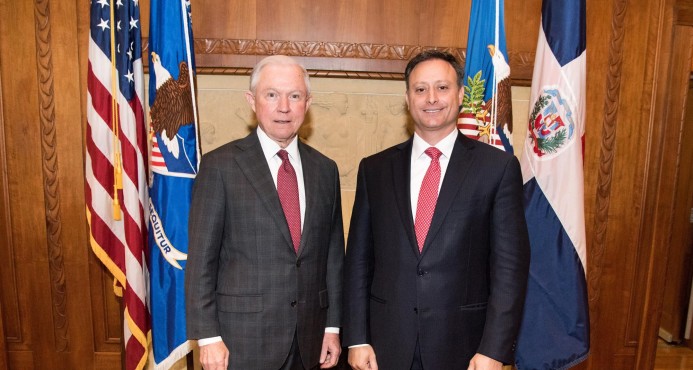 Washington.-  Dominican Republic justice minister Jean Rodriguez was received Wednesday by US attorney general Jeff Sessions, during which both officials “addressed cases of corruption ” and “the need collaborate in the investigations that are carried out in the Odebrecht case.”

Nonetheless major opposition party (PRM) deputy Faride Raful, just hours after the announcement Thursday, affirmed that Rodriguez, was called to the US to explain the slowness in the probe into Odebrecht’s admitted bribes to Dominican Govt. officials.

The Justice Ministry statement doesn’t provide details on what he two officials discussed on the case, but stresses the close ties and importance of further strengthening mutual legal assistance on transnational crime.

“Upon receipt of a visit from his Dominican counterpart, the US Attorney General expressed his willingness to strengthen collaboration between the United States and the Dominican Republic to achieve greater effectiveness in the prosecution of transnational crime,” the press release indicates.

“With almost 2 million Dominicans living in the United States by 2015, and more than 2.1 million visits of American tourists to Dominican soil in 2016, it’s inevitable that situations arise that require the intervention of the criminal authorities of one of our nations or that affect common interests,” Rodriguez said, accompanied by Anticorruption (PEPCA) prosecutor Laura Guerrero.

“Fundamentally, almost no one coming from the Dominican Republic to the United States is coming because they have a skill that would benefit us and that would indicate their likely success in our society,” Sessions said in a 2006 speech on the floor of the U.S. Senate in Washington.