One of the country’s kingpins goes before a judge today 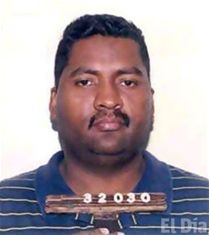 Cabrera, charged with running one of the most dangerous criminal organizations in the east region, at Las Americas International Airport arrived at 7:30pm and received by officials. He faces accusation of money laundering, drug trafficking and illegal weapons possession.

The La Romana Office of the Prosecutor is expected to request pretrial detention against Cabrera Ruiz was arrested in Spain, the country processed his extradition. His wife Claribel Amparo is till on the loose and is charged with complicity.

The investigation found that del Rosario, Cabrera and Rizik allegedly waged a bloody turf war to control the East region’s two rival drug trafficking organizations, which claimed the lives of dozens of people linked to the networks; some were executed while others were killed in pitched battles.

After being arrested in 2015, Rizik asked the authorities to question Cabrera and his brother Julio César, whom he identified as the true drug traffickers.

Cabrera is mentioned as one of the key links in the country for Puerto Rican kingpin José David Figueroa Agosto and of “Toño Leña” himself, who negotiated a plea deal with authorities.

Cabrera is also the main suspect in the murder of a 30-year-old engineer in 2010, reportedly on a mistaken identity.